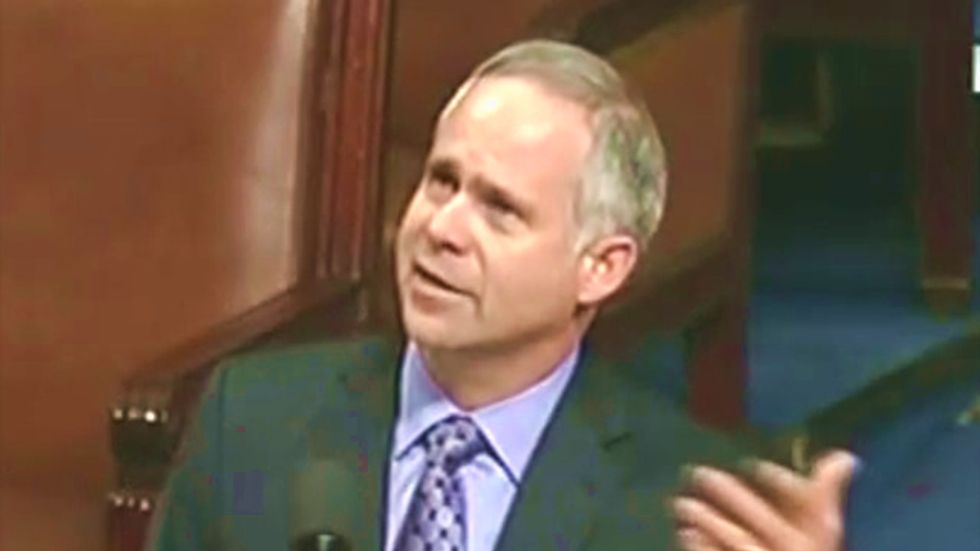 AA Kansas congressman with a history of anti-LGBT remarks sent out a glib comment on Twitter bemoaning a world where "transgender and transracial" are acceptable but artery-clogging trans fat are out.

As reported in The Hill, Rep. Tim Huelskamp (R) made the offensive tweet early Tuesday morning, writing, "Twisted world: transgender and transracial are ‘in’; and trans fats are out! #jenner #dolezal." The congressman included a link to an ABC News story on the FDA ordering the food industry to phase out artificial trans fats, calling them a threat to public health.

Huelskamp -- who was no doubt thinking he was being clever linking the stories about Caitlyn Jenner and Rachel Dolezal to cooking oils linked to increasing the risk of heart disease -- has a history of anti-LGBT rhetoric.

In 2014, he joined then-Congresswoman Michele Bachmann in railing against same sex marriage, while insisting that there is a third person in every marriage: God.

“Marriage can be tough. It really is. But God is calling you to do everything you can," Huelskamp explained. "It’s just not you and your spouse. There’s a third person in your marriage. And God would like to bless and protect that marriage, and give you many fruitful days ahead.”

Response to Huelskamp's tweet were not positive, with one commenter asking, "Are you literally an elected member of Congress?" while another wrote, "Shorter: happiness bad, obesity good. Sounds like Oklahoma, alright!"

Twitter user Daniel Aubry summed up many comments about Huelskamp on Twitter by insisting: "Damn, you're stupid."