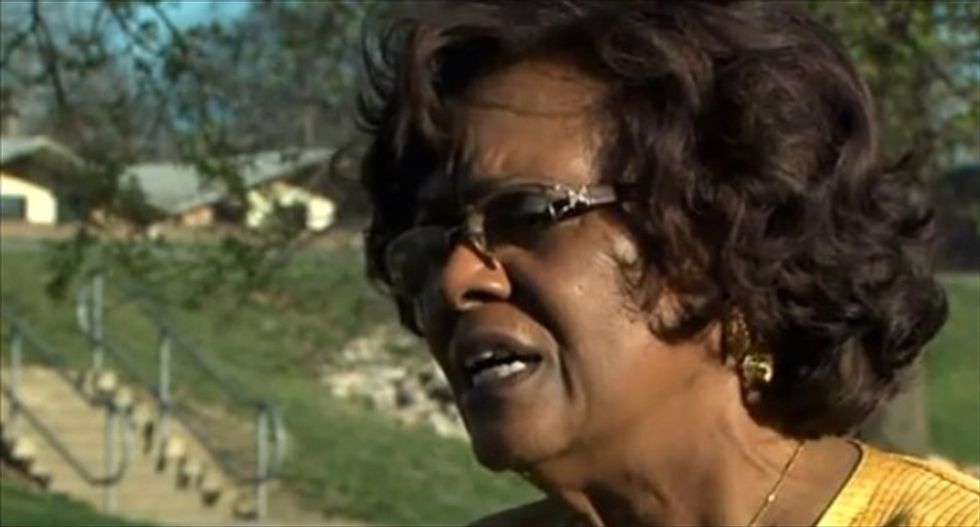 Kansas state Rep. Valdenia Winn (pictured above) could be kicked out of the legislature following a complaint filed by nine Republicans who objected to her criticism of a bill that would deny in-state college tuition to undocumented immigrant students, the Lawrence Journal-World reported.

The complaint accuses Winn, the ranking Democrat on the state House Education Committee, of using "inflammatory language and inferences toward the committee" when she blasted House Bill 2139 during a March 19 meeting.

"I have dreaded this day because this is a racist, sexist, fear-mongering bill that I would like first to apologize to the progressively-minded people of Kansas who are appalled that we are turning back the hands of time," Winn stated, according to a transcript of the meeting. "I am going to use strong language, Jim Crow tactics, and once again making Kansas a laughingstock. I want to apologize to the students and their parents whose lives are being hijacked by the racist bigots who support this bill because this bill is not an act of --"

"She just referred to this committee as racist," Rep. John Barker (R) said, cutting in.

"I said supporters. I am not saying anything," Winn responded. "But you know what, you can do anything you want, but I am going to say what I have to say because if the shoe fits, if the shoe fits, it fits. But this is an example of institutional racism, not individual racist, institutional racism because it deals with societal structural changes."

Winn stood by her comments in an interview with WDAF-TV later that month.

"I felt that it was an example of institutional racism because it targeted a select group, it in essence just shut them off for any future chances of higher education," she said at the time.

The bill was subsequently tabled. Barker is one of the nine GOP members who signed the complaint against Winn.

An investigative committee comprised of three Democrats and three Republicans will meet with Winn in a June 26 hearing, reportedly only the fourth of its kind in state history.

The board could recommend that she be "reprimanded, censured or expelled" or recommend no course of action. Any sanction would require a two-thirds majority by the entire House.

"What's most disturbing is the purposeful chilling effect that this type of conduct has on legislators," Winn's lawyer, Pedro Irigonegaray, told Talking Points Memo. "It's not right."

Two of the Republicans listed on the complaint are black, as is Winn. One of them, Rep. Tony Barton, accused Winn of slandering him personally.

"I am a sponsor of the bill and slander is far different than just making a controversial statement, and I take that personally," he argued.

State Minority Leader Tom Burrough said in a statement that the Kansas Democratic Caucus was standing behind Winn.

"This investigation is nothing but an attempt by the majority party to silence a minority voice that dared to speak up in opposition to discrimination," Burrough's statement read. "She has a constitutionally protected right to voice her opinion on this or any other issue, as do all Kansans."

Watch WDAF's report on the complaint below.