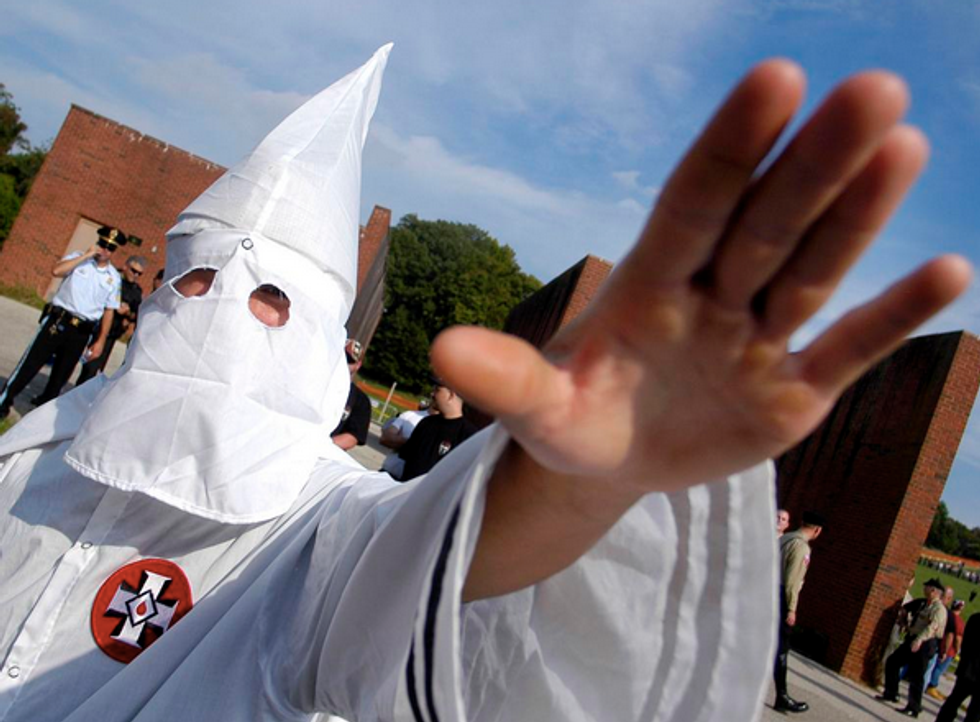 A man in KKK regalia (screenshot/Twitter)

Ku Klux Klan propaganda fliers were left in front of houses in a Los Angeles suburb over the weekend, the second such incident in southern California in a week to prompt homeowners to contact police with concerns, local authorities said.

Police in Whittier, California, about 12 miles southeast of downtown Los Angeles, said in a statement the fliers touting the white supremacist group were found littered on front lawns in one block early on Sunday.

"Throughout the block, clear Ziploc bags ... contained flyers, a rock and pieces of candy," police said on Sunday. "No specific threats were noted on the flyers, and no crime has been established."

The Los Angeles Times reported that the fliers contained comments on African Americans, and bore the name of the Loyal White Knights of the Ku Klux Klan.

One longtime Whittier resident who found a flier on her lawn, Stella Paquin, told the newspaper that at first she thought it was a hoax.

"I have never heard or read anything that impacted me so much to think, 'My goodness, there are just such hateful people,'" Paquin told the paper. "This really shocked us."

An NBC affiliate in southern California reported that the fliers also listed a North Carolina phone number which, when called, played a voicemail message referencing last week's shooting at an historic black church in Charleston that killed nine people.

The Los Angeles Times said there was a similar incident in Orange County last week when about 100 homes in Fullerton, California, received KKK fliers criticizing blacks, Latinos and Jewish people, also in plastic bags with a rock and piece of candy.

(Reporting by Daniel Wallis in Denver; Editing by Susan Heavey)