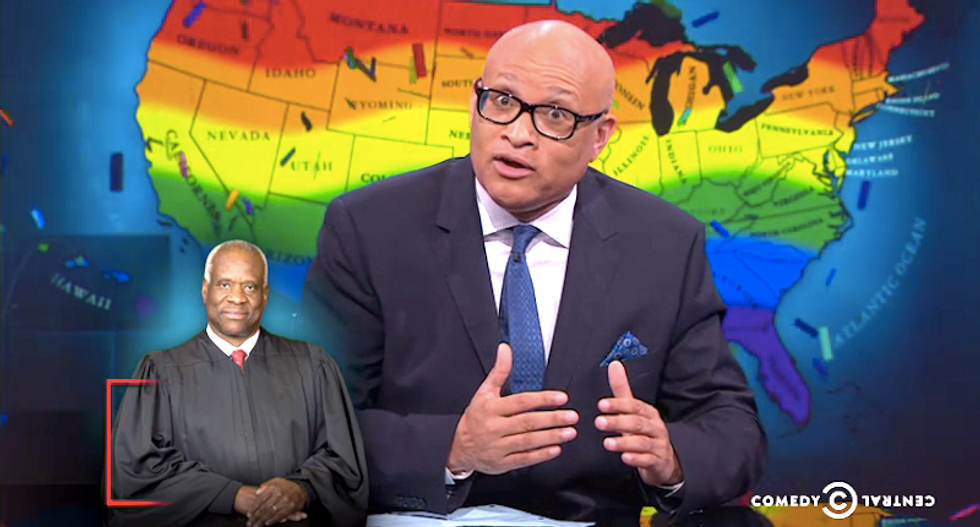 “The Nightly Show” host was particularly offended by Justice Clarence Thomas’ dissent to the Obergefell v. Holmes ruling, in which the justice used a slavery analogy to argue that the government could not confer dignity.

“Do you even know what slavery is?” Wilmore asked. “Slavery is the complete stripping of humanity and dignity. That’s the point of slavery. When do you think slaves were whipped? Whenever they tried to dare to show any humanity or dignity.”

He poked fun at Louisiana Gov. Bobby Jindal, a Republican presidential candidate, for arguing that “no earthly court can change the definition of marriage.”

“No earthly court? Is there some kind of intergalactic court I’m not (aware of)?” Wilmore said. “You do not want to take things to space court, Bobby Jindal. They are assholes in space court – they can read your mind in space court.”

Sen. Ted Cruz (R-TX) repeated a complaint from Justice Antonin Scalia’s dissent, in which the justice argued that the court was unrepresentative because no Protestants or evangelical Christians served on it.

“There are no Muslims on the court, no Buddhists, Klingons or Romulans,” Wilmore said. “Once again, we’ve got to go to space court to get true diversity.”

He celebrated CNN host Jake Tapper for asking GOP presidential candidate Donald Trump what was traditional about being married three times, as critics have pointed out the real estate tycoon has been.

“They have an excellent f*cking point,” Wilmore said. “Jake Tapper, you just tappered that ass.”