Larry Wilmore compares Rachel Dolezal to climate deniers: 'This is not based on science' 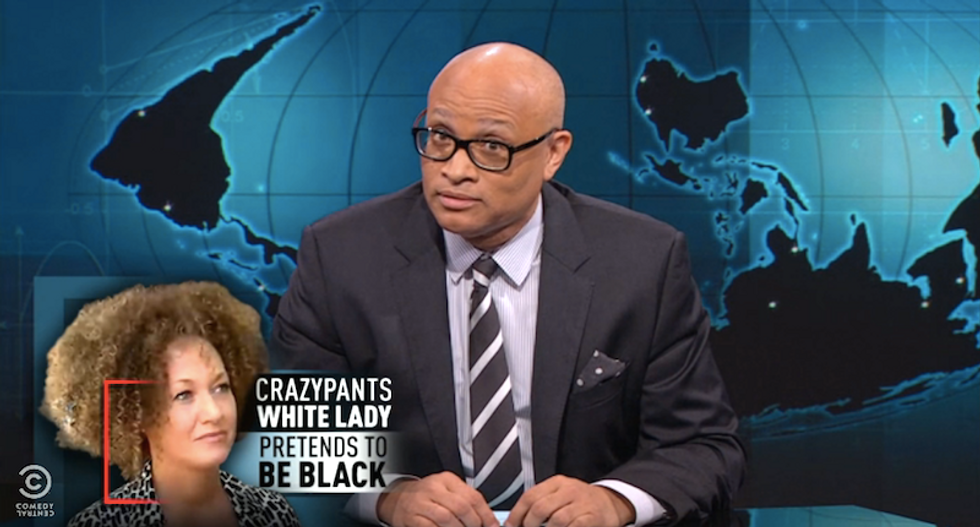 Larry Wilmore tackled the case of Rachel Dolezal, a white woman who posed as black and was elected president of Spokane’s NAAACP chapter.

The “Nightly Show” host said he had dozens of questions about the situation.

“First: Is she black?” he said. “Maybe she’s just light-skinned-ed-ed.”

Wilmore showed an interview with Dolezal’s parents, who shared photos of their daughter as a teen.

“Let me give you a sense of how not-black her actual parents are,” he said. “Here they are, Larry and Ruth Ann, live from Montana explaining to the world how white their daughter is. Not only do they clearly look white, the fact that they would snitch on their only daughter further proves their non-blackness.”

Wilmore mocked Dolezal’s evasive answers and behavior as local reporters tried to pin her down on her claims to be black.

“So she considers herself black -- let me see if I can clarify that,” he said. “It is her opinion that she is black. Much like climate change denial – this is not based on science. Sorry, lady – you are white. You don’t get an opinion on this. This is not a Buzzfeed quiz: Which ‘Living Single’ character are you?”

Wilmore described how Dolezal had sued the historically black Howard University for racial discrimination against her and then, after she became the NAACP chapter president, claimed earlier this year to have received racist threats in the mail that postal inspectors now suspect she might have planted herself.

“Let me tell you where this story breaks down,” Wilmore said. “I’m not going to say that somebody out there doesn’t hate you, but I am going to say that this is 2015 – and even racists aren’t sending their racism through snail mail anymore. Hate’s got to get out quick, man.”

He said that whatever good she might have done with the NAACP was negated by the apparent fraud.