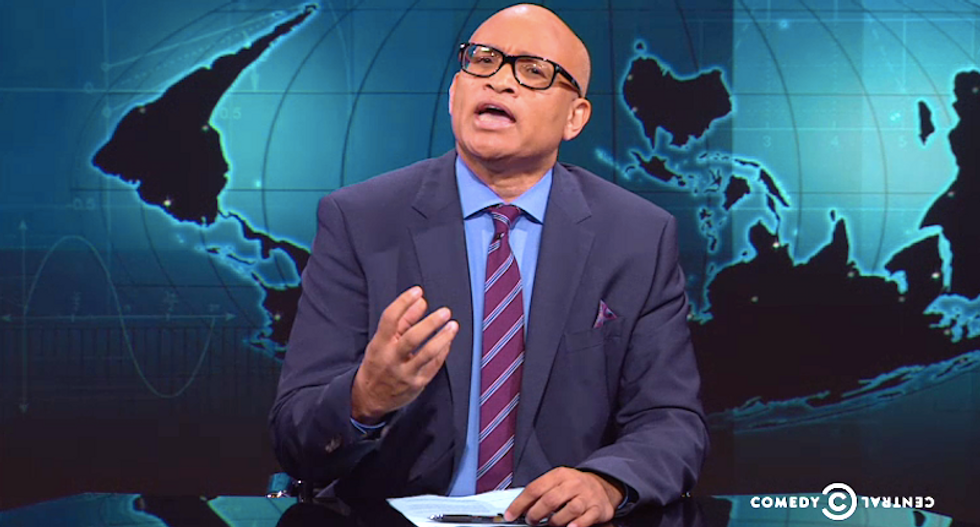 Larry Wilmore blasted conservative efforts to distract from the obvious racist motivation for a terrorist who sat for nearly an hour with black churchgoers before gunning down nine of them.

The “Nightly Show” host said he was initially reluctant to discuss the massacre because his comedy program wasn’t designed to handle that type of tragedy, but he was outraged that conservatives tried to pretend that the victims were targeted because they were Christian.

“I know we talk about race a lot on this show, but I think we can all agree this time that this is a racially motivated attack,” Wilmore said. “It couldn’t be clearer when it comes out of the killer’s mouth. But even with all of that evidence, on a day like today, Fox News just makes my f*cking head explode."

He played a barrage of video clips from Thursday morning’s “Fox and Friends” horror show, where the hosts described the terrorist act as a “horrific attack on faith.”

“I know you guys don’t want to admit that racial stuff isn’t going on, but how can there be any doubt when it came out of the gunman’s mouth?” He told his victims, ‘I want to shoot black people.’ I think when he says black people, he means black people – and not Christians.”

A survivor said the gunman explained that he was angry at black people because he believed they “rape our women” and were “taking over our country.”

“He’s being very clear,” Wilmore said. “Nobody thinks Christians are going around raping everybody and taking over the country. That’s not a thing – unless you’re a Duggar. Then it’s a thing.”

He ripped Fox News for sending out a black pastor, in an apparent attempt to confuse and distract viewers, to argue the mass shooting showed the “rising hostility against Christians across the country because of our biblical views.”

The conservative pastor, E.W. Jackson, argued that the shooter was biased against Christians – not black people – because he chose a church instead of a bar or a basketball court.

Wilmore said Fox News and GOP presidential candidate Rick Santorum’s efforts to blame the shootings on anti-Christian bias showed that understanding of racism might actually have gotten worse in the past 50 years – since the height of conflict over the advancement of civil rights for blacks.

“Let me give you an example,” Wilmore explained. “Four black girls were murdered in a church bombing in Birmingham, Alabama, in 1963. Back then, no one pretended to wonder what the motivation was. If you tried to say it was about religion, even the perpetrators back then would have corrected you. ‘No, we killed them because they’re nigras – that’s why we did it.’”