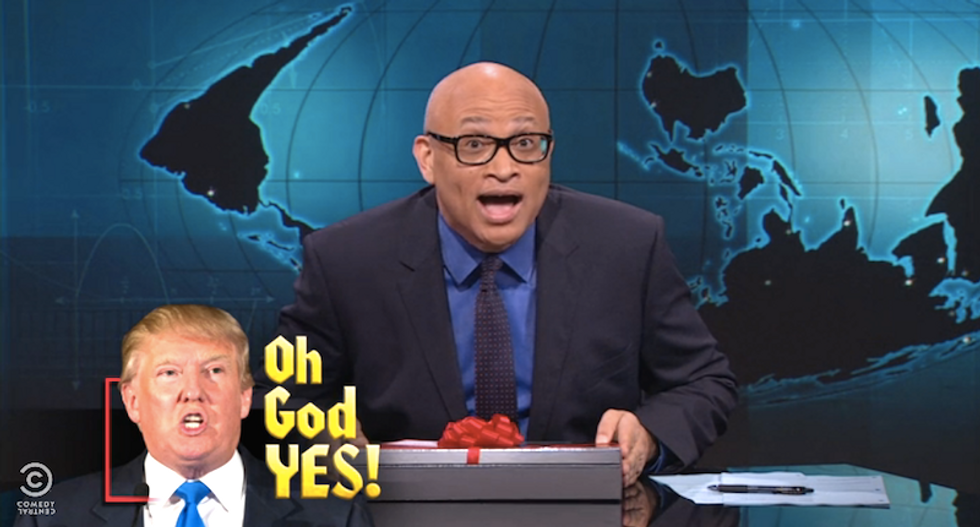 Larry Wilmore received a gift from the comedy gods Tuesday on “The Nightly Show.”

He opened the president to find Donald Trump had announced he is officially running for president -- and the skies parted and Wilmore was bathed in a heavenly glow as angels sang.

“How did you know, comedy gods?” Wilmore said. “I’ve got a show, and Trump’s running for president. Good news for me, horrible news for our writers -- because all the jokes are officially writing themselves. Take it up with the Guild, mother*ckers.”

Wilmore sampled from a “buffet” of wacky Trump statements – including a harangue about drug-smuggling rapists crossing the border – during his announcement while munching on a plate of ribs.

“It’s all too perfect,” said Wilmore through a mouthful of barbecued pork. “Mexicans send rapists packed with drugs here. That’s who comes to America – guys coming here to make a living in the rape game, trying to scrape up enough rape money to send home back to the family.”

Next he sampled Trump’s bizarre complaints about terrorists building hotels in Syria without having to pay interest, as he does.

“So the real threat from ISIS is their entry into the hospitality industry,” Wilmore said. “All right -- and the victim who has suffered the most at the hand of ISIS? Donald Trump.”

He then showed Trump bragging that he could build a great – and low-cost – wall on the southern border and then force Mexico to pay for it.

“You can build walls better than anybody, so go f*ck yourself, Great Wall of China,” Wilmore said. “Then, you’re going to inexpensively build a wall to keep out Mexicans, and then you’re going to have them pay for your low-cost racist wall? That’s pretty f*cking amazing.”

Trump then said the U.S. had grown so weak that its nuclear arsenal no longer works.

“Our nukes don’t work? Kind of sucks to find out this way, right?” Wilmore said.

He wrapped up the segment by showing a montage of Trump bragging about himself being rich, nice, well-connected, smart, and having “lots of websites all over the place.”

“I am so sick and tired of this f*cking guy,” Wilmore said. “You know, Donald Trump, show me your birth certificate, OK? Then I’ll take you seriously, because that’s what you said to the black man.”