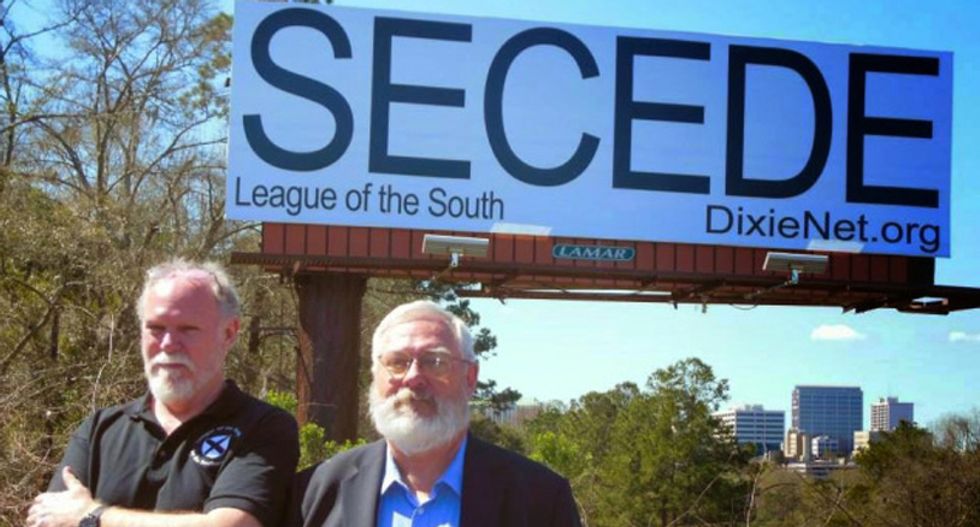 Michael Hill, President of the League of the South, on left. South Carolina League Of The South Chairman Pat Hines on right -- Facebook

The leader of a Confederacy-worshiping organization is defending his group's celebration of the the assassination of President Abraham Lincoln, while complaining that assassin John Wilkes Booth "took too long" to accomplish his mission.

Appearing on Alan Colmes' Fox News radio show, South Carolina League of the South Chairman Pat Hines told the radio host that he sees nothing wrong with celebrating the murder of America's 16th president, calling Lincoln "the most murderous, treasonous president that ever existed."

Asked by Colmes if he found Booth's actions "honorable," Hines said he was only disturbed that it took Booth so long.

"John Wilkes Booth was a Confederate agent who, sadly, he didn’t fulfill his mission for almost 2 1/2 years," Hines said. "But he was assigned to kill Lincoln. And it’s too bad that he took as long as he did to do it."

"Why would you favor the assassination of an American president?" Colmes asked.

Hines explained, "Well, he was a United States President. Well, he was commander-in-chief, which makes him a legitimate target immediately."

When asked by Colmes if any commander-in-chief is a "legitimate target," Hines didn't pause before replying, "Well, they are."

In a recent appearance on CNN, Hines described the possible removal of the Confederate flag flying in front of the South Carolina capital building as "cultural genocide."

You can listen to the whole interview below: