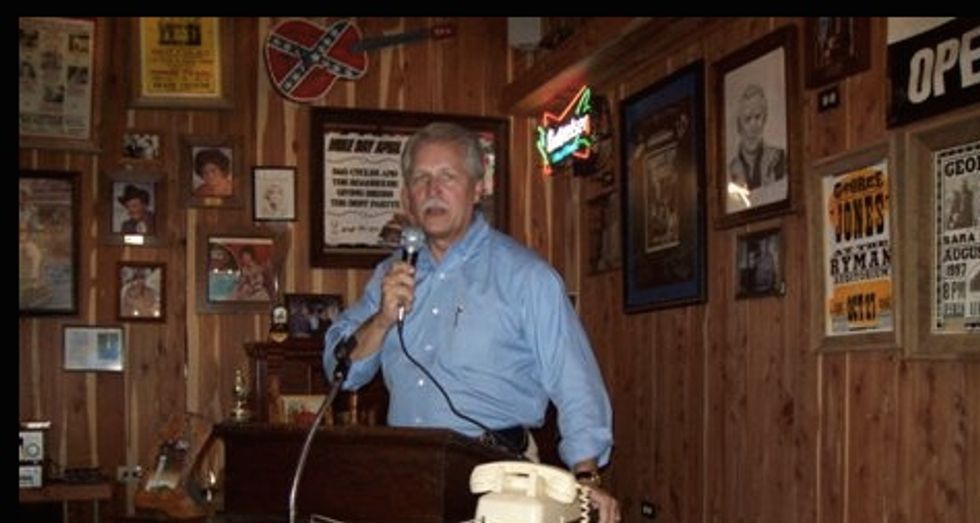 The Sons of Confederate Veterans are behind the memorial, whose unveiling ceremony is scheduled for 10:00 AM on July 11 at the Old City Cemetery in Murfreesboro -- the site of a deadly Forrest-led raid on July 13, 1862.

"I don't have any issues with that," Ketron tells the Daily News Journal of the monument to Forrest and the 26 Confederate cavalrymen who died in the 1862 battle. "If there were a remembrance of the colored troops, I would support that, as well, because it still continues to recognize history. It doesn't matter to me, as long as we are recognizing pieces of history."

In contrast to some of his statehouse colleagues, Ketron does not support the removal of Forrest's bust from Capitol grounds or renaming Forrest Hall at Middle Tennessee State University.

The Daily News Journal points out that Ketron "authorized a law a couple of years ago that requires approval of the Tennessee General Assembly to remove historical monuments from state, county, or city government property." In a time where other states are removing Confederate symbols from public grounds, Ketron is doing his best to keep them up in Tennessee.

Rutherford County Historian Greg Tucker, who also writes a column for the Daily News Journal, says he doesn't understand why public officials are distancing themselves from an iconic white supremacist in the days and weeks following a racist massacre in Charleston that killed nine.

"Forrest had nothing to do with that tragedy in South Carolina," Tucker says. "He's part of our history. He saved the population of Murfreesboro and Woodbury for what could have been unjustified executions [by Union forces]... He was going to be executed as part of an effort to intimidate the local population into submission."

Ketron's official biography describes him as a Christian, an Eagle Scout (a distinction he earned at the age of 12), an award-winning insurance salesman, and a member of the NRA and the National Right-To-Life.

The state senator has a history of making controversial statements about Islam. In 2011, Ketron introduced a bill prohibiting the adoption of Sharia law.