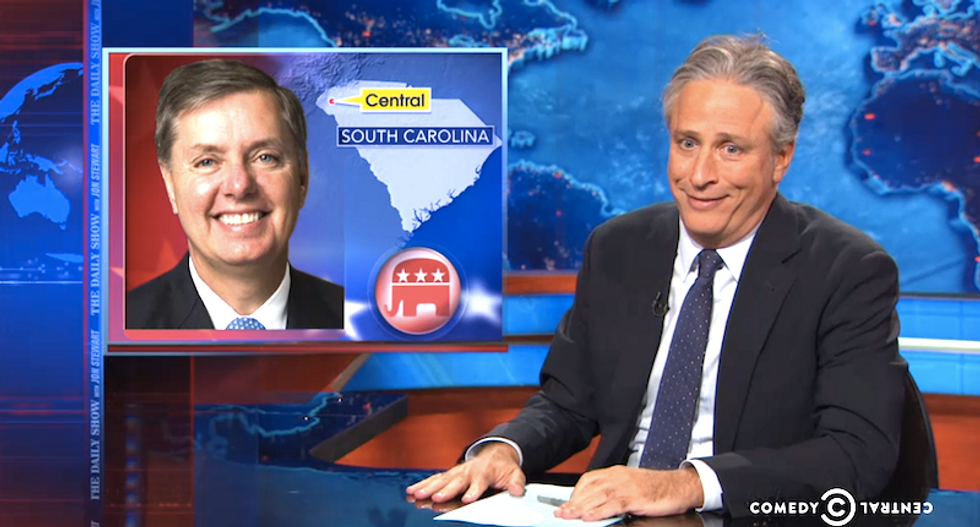 Jon Stewart mocked the disconnect between Sen. Lindsey Graham’s campaign message and the song he chose to exit the stage to Monday after announcing his presidential bid.

After arriving more than an hour late, the South Carolina Republican told supporters about his hardscrabble upbringing, the horrors of President Barack Obama’s policies, and the existential threat posed by Islamic militants – then walked off the stage to James Brown’s “I Feel Good.”

"We will never enjoy peaceful co-existence with radical Islam because its followers are committed to destroying us and our way of life," Graham warned. "The world is exploding in terror and violence but the biggest threat of all is the nuclear ambitions of the radical Islamists who control Iran."

Stewart said “fear-mongering just sounds so much more charming” in a Southern accent.

“I mean, my stars, with the Muslims so close to gettin’ our launch codes and turnin’ our own missiles on us, I’d say there’s little hope we’ll survive the summer,” Stewart said, adopting a histrionic accent and fanning himself with a paper.

Graham kept the crowd in his hometown of Central, S.C., waiting as friends and relatives told personal anecdotes about the senator, and a local high school band periodically entertained the crowd with light jazz.

“What is that, the ‘Boogie-Woogie Bugle Boy From Company B’? Is Graham running to defeat FDR?” Stewart asked, then adopting an old-time movie accent. “New Deal? I say ‘screw deal,’ pardon my French. Buy war bonds!”

After immersing the crowd in existential dread, Graham walked off the stage to Brown’s upbeat pop classic.

“After that speech, everyone’s running for the bomb shelters,” Stewart said. “You were scaring the sh*t out of people. I don’t think ‘I Feel Good’ goes with one single sentence of that speech.”