Maher tells Bernie Sanders: Your campaign must be working 'You've got Hillary talking like Elizabeth Warren' 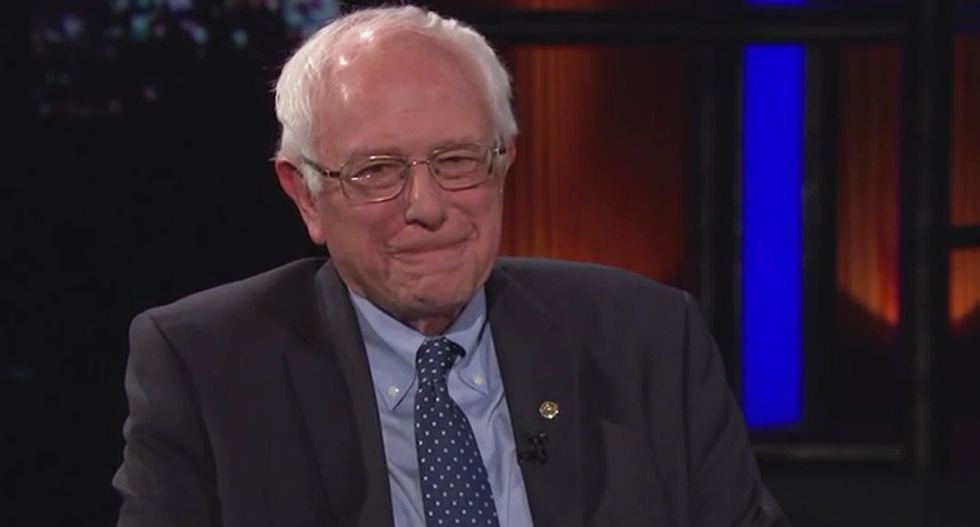 Walking onto the stage to chants of "Ber-nie, Ber-nie" the Vermont independent sat down and explained that his campaign was about something other than normal politics, stating, "It's a very radical idea: we're going to tell the truth."

"The truth is that, for forty years, the middle class of this country has been disappearing. And there has been a huge transfer of billions of dollars of working families to the top one-tenth of one percent." Sanders said. "And what the people of this country are saying is, 'Enough is enough, our government, our country, belongs to all of us, not just a few billionaires.'"

"So let's dig down a little deeper into the campaign," Maher replied. "I mean you are closing the gap on Hillary, but obviously she's still way ahead with women. You do very well with men and the older -- older men, especially. Now some women you will just never get...I don't mean you personally."

Maher went on to advise the candidate that "You could do well with younger voters. They liked Ron Paul.  He was not a young-un, but he had that same authenticity thing going," before jokingly asking Sanders "Are you on Tinder?"

Sander explained that his campaign has "A very active social media effort."

"In the Senate, we have more people on our Facebook page, than any other member of the United States Senate," he said, before adding, "Look, what we want to do is tap the idealism of the kids. And what the kids are saying, for example, is that this country should lead the world in transferring our energy system and dealing with climate change. And that solution we're going to talk about a whole lot."

Watch the interview below, uploaded to YouTube by  Real Time with Bill Maher:

'Are you kidding me?': Former CIA official stunned by Trump keeping nuke docs at 'his beach house'

Appearing on CNN's "New Day" the morning after the Washington Post reported that the FBI was sent to Donald Trump's Mar-a-Lago residence with a search warrant on a tip that he had top secret nuclear documents, a former CIA counter-intelligence official expressed dismay and shock at the most recent turn of events in this week's saga.

Speaking with hosts Brianna Keilar and John Berman, Phil Mudd, who served as an analyst on the CIA’s Counterterrorist Center, said that the former president may have had documents "in his beach house" that he -- in his former capacity -- would have been barred from reviewing.