Male overcompensation is toxic even when it's not violent 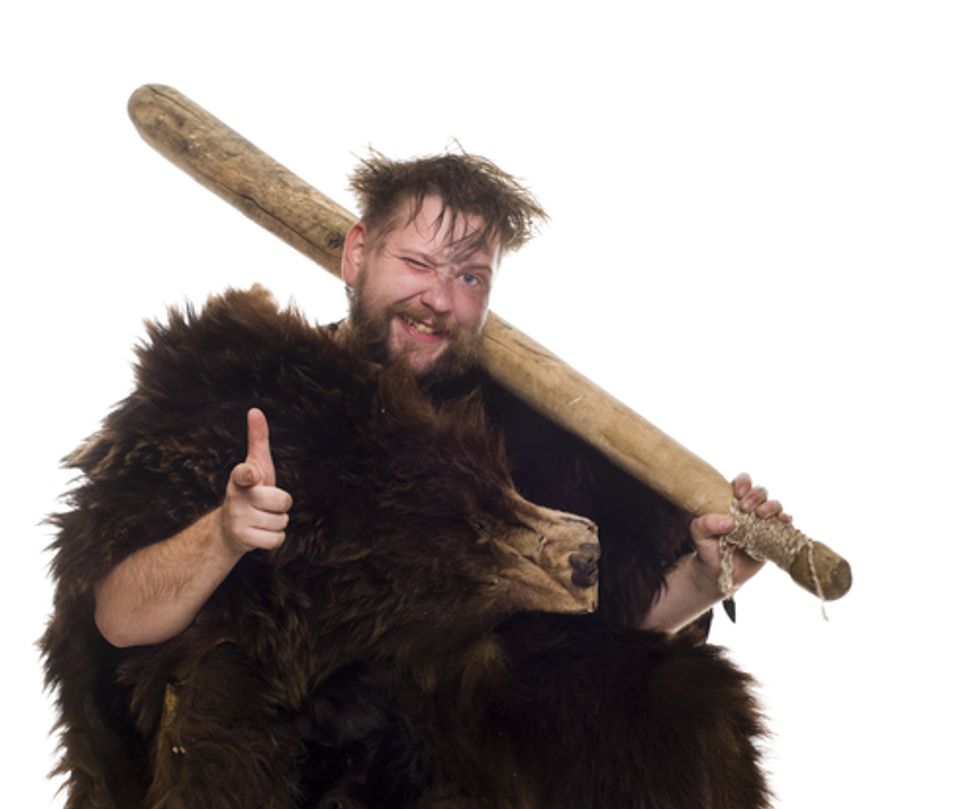 Kudos on the art choice to whichever of my Raw Story colleagues who republished this piece from Medical Daily about a study, published in Social Psychology, that measured what most of us probably could tell you from experience: Men who feel "feminized" in some way tend to overcompensate by exaggerating their masculinity, often in ways that are outright negative.

Researchers recruited men to squeeze some hand-gripper thing and randomly told them either that they got "male" results or "female" (read: weak) results. To be clear, this was done at random. There was no actual correlation between how hard you squeezed the thing and what results you were given. Afterwards, they were given a survey to fill out that had a bunch of questions, some pertaining to stereotypical gender roles and some that were not. The results were sadly predictable:

What they found was interesting, but not surprising. Those who were told they had a weaker grip exaggerated their height by an average of three-quarters of an inch. “Height is something you think would be fixed, but how tall you say you are is malleable, at least for men.” Cheryan said in a recent press release.

Researchers also found that those who scored lower in the first part of the study also exaggerated the number of their romantic relationships, claimed to be more aggressive and athletic, and did not present any interest in stereotypically “feminine” products. “We know that being seen as masculine is very important for a lot of men,” Cheryan said. “We discovered that the things that men were using to assert their masculinity were the very things that are used as signals of identity.”

As noted in the press release, this was a somewhat harmless study, but it backs up other studies that have shown a correlation between feeling emasculated and lashing out violently against women.

But I want to point out that this way that men are taught to guard forever against being emasculated does harm outside of truly scary situations where men beat or rape women to feel more powerful. If you're a woman who is around men, in a romantic capacity or even just as friends/family (i.e. about 99% of us), you quickly learn how to lie and distract and flatter men on these issues, not out of kindness but just to avoid having to deal with the ugly reaction that so many men produce when they feel even slightly emasculated. It infuses male/female relations with all sorts of dishonesty, and it becomes reflexive over time.

This is on a level beyond the basic flattery and gentleness that we show each other as just a matter of course. I'm not saying run people down, of course.

But this hyper vigilance about masculinity creates this really grotesque situation where men have more freedom to express legitimate concerns or make legitimate requests of women, but women have to tiptoe lest they press the emasculation button. It's particularly bad in more conservative areas. One of the ways you see this manifest, I've long noticed, is in the massive gap in basic appearance upkeep. You go to some parts of the country and you'll see tons of couples out where the woman is wearing make-up and has her hair done and her clothes are pulled together and she's wearing heels and a nice shirt or dress and her partner....is in shorts, with a bad haircut and may even be wearing Crocs or something. But that's how it goes. She knows that if she starts to let things go a little, someone---maybe her partner, maybe someone else---will judge her for it. But no one wants to emasculate a dude by telling him that his appearance matters, too, lest they freak him out and send him on some spiral. So this wild double standard entrenches itself.

I think this is another reason the housework gap persists, despite women's gains in other areas. Asking a man to do chores is a real double whammy in the perceived emasculation front, both in the "weakness" of having a woman criticize you and in the "weakness" of being asked to do "female" things like clean. It's really hard to make this ask without triggering a masculine overcompensation response, which is likely to manifest in hostility or a reassertion of gender hierarchy (like calling your wife a "nag").

The good news is that I think this is really one of those gendered things that can be dramatically improved through mindfulness. Men can accept that they've been socialized to feel this way and make efforts to try not to overreact. After all, doing the "me no girl, me big caveman!" act is, in itself, embarrassing. So if the concern is avoiding embarrassment, start by not doing that.