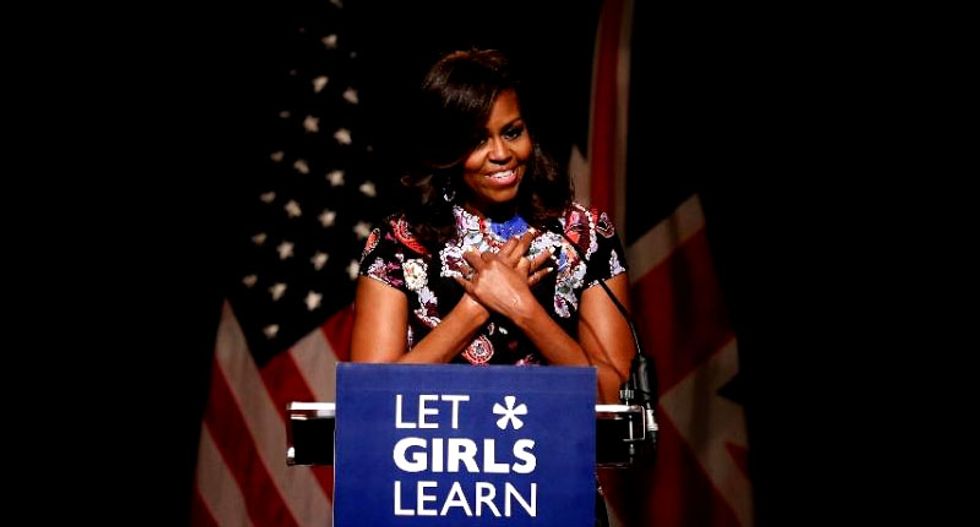 US First Lady Michelle Obama visited a London school on Tuesday at the start of a European tour as she announced plans for $200 million (177 million euros) in programmes to promote girls' education worldwide.

"I'm here because girls like you impress me and inspire me," Obama told pupils at Mulberry School for Girls in east London ahead of a trip to Downing Street, where she will have tea with Prime Minister David Cameron and his wife Samantha.

"With an education from this amazing school, you have everything you need to rise above all of the noise and fulfil every one of your last dreams," she added.

The first lady unveiled plans for the two countries to empower adolescent girls with a particular focus on "fragile countries".

Obama said 62 million girls around the world did not attend school, calling it a "heartbreaking injustice" caused by factors including forced marriages, early pregnancies, abuse and sexism.

Writing in the Financial Times, Obama said Britain the and US would work together on teacher training, girls' leadership camps and other community-based programmes in developing countries.

A choir singing Labi Saffre's "Something Inside So Strong" greeted Obama as she arrived at the school in bright sunshine.

The first lady made her maiden speech outside the United States at a school in north London in 2009, and later invited a group of pupils to the White House.

"As I stood before that room full of girls, all I could think of was about how much promise they had inside of them," she recalled. "Those girls were the inspiration for so much of my work as first lady."

Obama, her mother and two daughters are being hosted by Prince Harry, the queen's grandson, having previously the first lady at a US event for military mothers.

Obama flew into London's Stansted Airport late Monday, where she was welcomed by US military families, and will leave early Wednesday for Italy.

There she will visit Milan, where a world expo devoted to food is being held and where she will discuss her "Let's Move!" healthy lifestyle initiative.

The first lady will also do some cooking with a group of children and meet Italian Prime Minister Matteo Renzi.

Obama will then visit the US Army base in Vicenza in northern Italy, where she will meet American military families, followed by a visit to Venice.