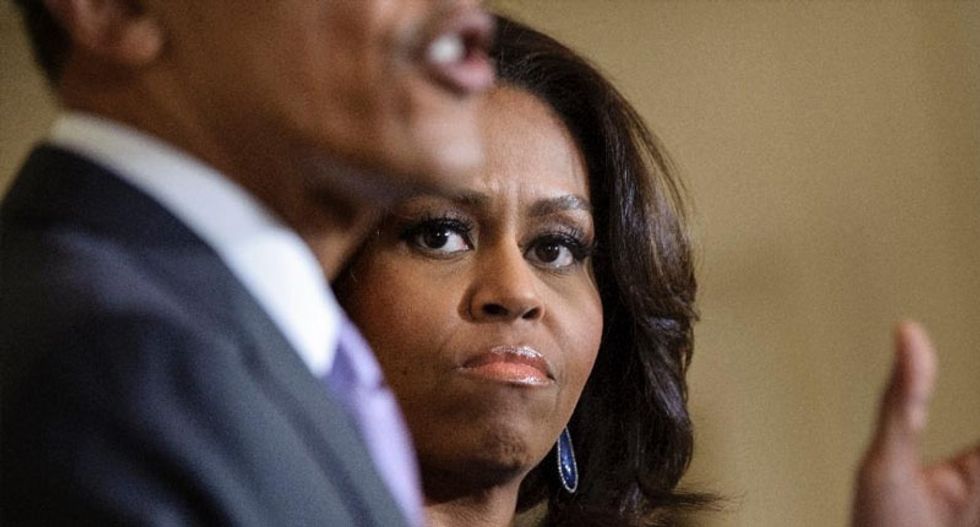 Stung by criticism over what she said during her husband's first run for the presidency, Michelle Obama was measured in sharing her views when she entered the White House in 2009.

But now America's first lady is developing a more personal and outspoken tone as the president's second term winds down.

Beyond her advocacy work for relatively uncontroversial causes such as the fight against obesity and help for families of military veterans, she now seems determined to speak directly to some of the inequalities of American society, including racial issues.

"We know that today in America, too many folks are still stopped on the street because of the color of their skin," Obama said last month during a speech in Topeka, Kansas in which she also lamented the lack of diversity in classrooms.

"Many young people in America are going to school largely with kids who look just like them. And too often, those schools aren't equal, especially ones attended by students of color which too often lag behind, with crumbling classrooms and less experienced teachers," she said.

Three weeks later, in her home town of Chicago, she again addressed the intractable problems afflicting minority communities in many American cities.

"I know the struggles many of you face," she said.

"How you walk the long way home to avoid the gangs. How you fight to concentrate on your homework when there's too much noise at home. How you keep it together when your families are having hard times making ends meet."

Michelle Obama, the daughter of working-class parents, went on to earn degrees from Princeton and Harvard, two of America's most prestigious universities.

For the first lady, who on Monday begins a trip to Britain and Italy with her two teenage daughters Malia and Sasha, the racial question is a politically sensitive one.

In 2008, during Barack Obama's first presidential campaign, she said: "For the first time in my adult lifetime, I'm really proud of my country."

The remark unleashed a storm of criticism over her patriotic credentials, including from Cindy McCain, wife of Republican candidate John McCain, who said she'd always been proud of America.

"In the first campaign, she was burned -- and she was hurt -- by criticism of what she said on the campaign trial," said Peter Slevin, a professor from Northwestern University who has just published a book called "Michelle Obama, A Life."

"Her critics basically said she was being un-American," he added.

On May 9, during a speech to students of the historically black Tuskegee University in Alabama, the first lady seemed to turn a corner.

She talked about the long struggle for civil rights, and candidly described attacks she suffered during her husband's first campaign and the doubts these caused.

"As potentially the first African American first lady, I was also the focus of another set of questions and speculations; conversations sometimes rooted in the fears and misperceptions of others," she said.

"Was I too loud, or too angry, or too emasculating? Or was I too soft, too much of a mom, not enough of a career woman?"

"Back in those days," she added, "I had a lot of sleepless nights, worrying about what people thought of me, wondering if I might be hurting my husband's chances of winning his election, fearing how my girls would feel if they found out what some people were saying about their mom."

Slevin said the first lady has always addressed powerful social themes but is getting more confident as the clock ticks down on her time in the White House.

"Now perhaps she feels more free to be explicit," he said.

He also noted Obama's choice of venue to deliver her message, namely, as an African American from humble circumstances who rose to great successes, speaking to groups of young African Americans and girls.

Obama, who will be 53 when she leaves the White House in January 2017, has said she has no intention of following in the footsteps of Hillary Clinton and running for office.

More popular than her husband and some of her predecessors, there is a lot of interest in what's next for Michelle Obama, and how she will address matters close to her heart.

"She is working on a book," Slevin noted. "It's a big question (as to) what she chooses to say about this world."