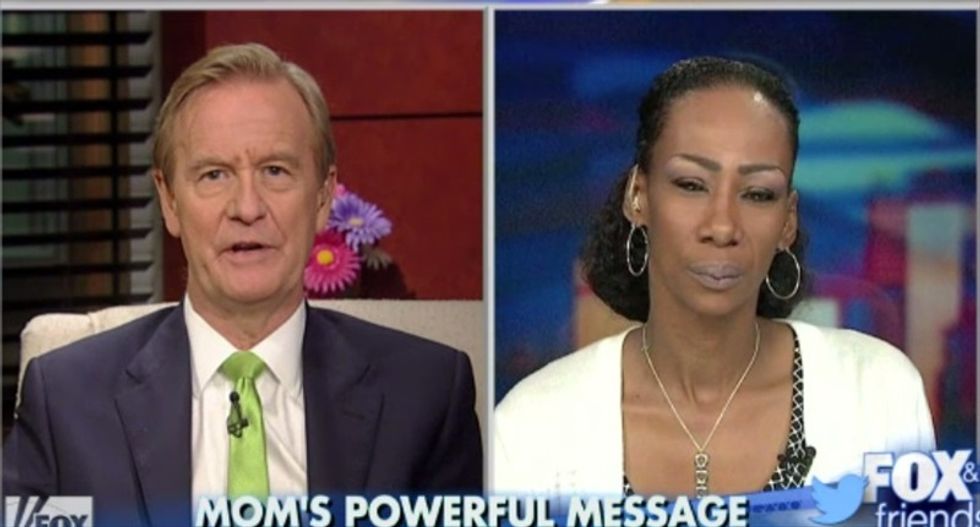 A Texas woman lauded by Fox News for her commentary blaming parents in McKinney for the uproar surrounding former police officer Eric Casebolt did not mention that authorities needed a warrant to reach her son in connection with an alleged attack.

As Crooks and Liars reported, Kisa Jackson appeared on Fox & Friends on Friday after a video she recorded inside her car justifying Casebolt's actions gained traction online.

"It's about, again, the parents, and teaching our children to respect authority figures," Jackson says in the video. "Whether it's an officer, whether it's a teacher, whether it's just a parent walking down the street. We are so quick to say, 'They'd better not touch my kid; if they touch my kid, all hell's gonna break loose.' No, your ass [is] gonna be in jail with them."

Jackson told host Steve Doocy that the parents of the teenagers who were present when Casebolt wrestled 15-year-old Dajerria Becton to the ground and drew his gun on two other black teens needed to "take ownership" of their childrens' actions.

"These kids were out of control. I never disputed that the officer was, also, but he wasn't my concern," Jackson said to him. "These kids are our future, so I was just upset that they did not know how to conduct themselves with the authorities. It really bothered me that their safety was in danger and they had no clue."

In her video, Jackson also argues that Casebolt was within his rights to not only take Becton to the ground, but put his knee on her back, saying that the officer could not have known "how strong this little girl is" or what the teenagers at the party were intending to do. Jackson also accused Becton of resisting when Casebolt grabbed her.

"You can not pull away from an officer," Jackson says. "At that point, that's a threat. So he had every right to detain her by 'any means necessary,' from Malcolm X."

But neither Doocy nor Jackson mentioned that police in Baton Rouge, Louisiana had to go to great lengths to catch up with her son, Jalen Mills, before finally arresting him last June for allegedly punching a woman in the mouth.

The New Orleans Times-Picayune reported at the time that investigators issued a felony arrest warrant for Mills -- a defensive back on the Louisiana State University football team -- after he no-showed a scheduled appointment and failed to return phone calls. Authorities eventually reached him through the university.

Mills' initial avoidance seems to run counter to Jackson's statement in her video that parents "should teach your children that when the police arrive to a scene, you stand there and you wait for instructions." He was initially charged with second-degree battery and suspended from the team. The woman accused him of hitting her a month earlier outside his apartment.

The alleged victim told police that she was there looking for a friend when Mills shut the door in her face. After knocking again, the woman said, she "heard someone say something behind her," only to be punched by Mills when she turned around, causing her to fall to the ground. Mills was later identified in a line-up by both the victim and a witness.

The charges against Mills were later reduced to a misdemeanor, after prosecutors said they could not prove the woman suffered "permanent disfigurement or unconsciousness."

East Baton Rouge Parish District Attorney Hillar Moore said two months ago that they would drop the charge against Mills if he completed a pretrial "diversion" program. He was also ordered to pay the woman's medical bills.

Moore also said that the woman agreed to settle the dispute through the program, rather than a trial, saying, "She just wants it done."

While both Jackson and several Fox News guests have defended Casebolt's actions, even McKinney Police Chief Greg Conley condemned them, calling them "indefensible" at a press conference following Casebolt's resignation from the department earlier this week.

"Our policies, our training, our practice, do not support his actions," Conley said. "He came into the call out of control, and as the video shows, was out of control during the incident.

Watch Doocy's interview with Jackson, as aired on Friday, below.