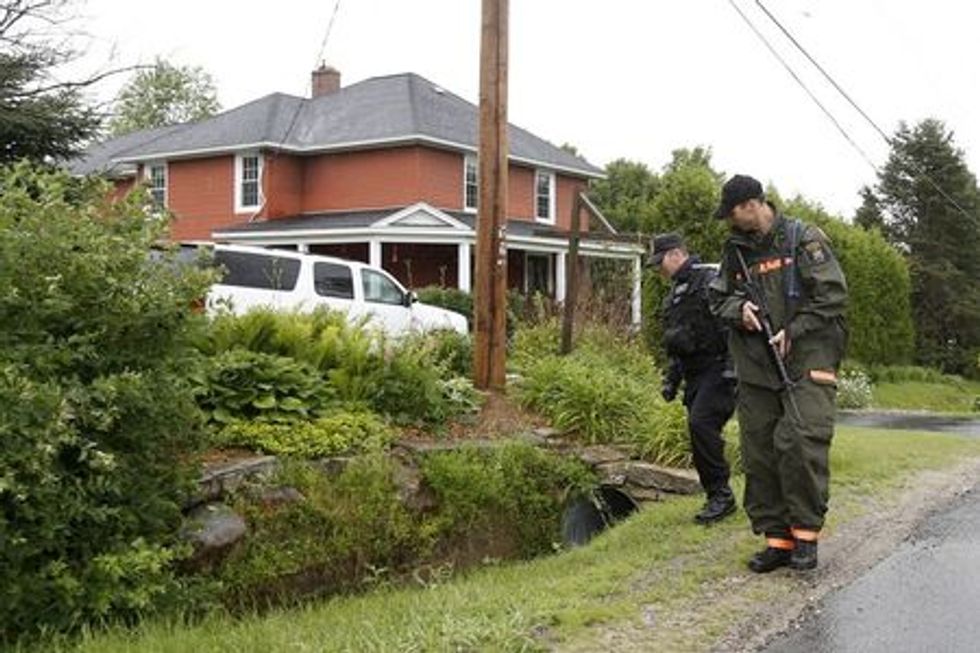 David Sweat, one of two New York state inmates who escaped from prison three weeks ago, was shot by police near the Canadian border and rushed to a local hospital on Sunday, two days after his accomplice was killed, authorities said.

His capture was the dramatic climax of a massive manhunt for Sweat and his fellow inmate Richard Matt, who were discovered missing from the Clinton Correctional Facility in Dannemora, New York, on June 6. Some 1,300 members of law enforcement took part in the search through the forests and bogs of northern New York.

Sweat, 35, was shot twice and taken into custody in the town of Constable, New York, 23 miles (37 km) north of Duane, where his accomplice was shot and killed on Friday, authorities said. He was captured just a mile and a half (2.4 km) south of New York's border with the Canadian province of Quebec.

Sergeant Jay Cook of the New York State Police was on patrol alone when he spotted "a suspicious man walking down a roadway" at about 3:20 p.m. local time.

Cook called out to the individual, and when he turned the officer recognized him as Sweat, police said.

The fugitive took off running and the officer shot him twice in the torso, police said. Sweat was taken into custody and transported to a local hospital for treatment.

"The nightmare is finally over," New York state Governor Andrew Cuomo told a news conference. "If you were writing a movie plot, they would say it was overdone." He added that Sweat was in stable condition.

Cuomo said he had personally congratulated the officer.

"It was a very courageous act. I said to Sgt. Cook, who has two daughters, 16 and 17, 'You go home tonight and tell your daughters you're a hero,'" the governor said.

CNN showed a photograph of pale, gaunt-looking Sweat after he was captured, seated on the ground in a dark jacket and muddy camouflage clothing. He appeared to have dried blood on his face.

Sweat has not been interviewed by investigators yet, Joseph D'Amico, superintendent of the New York State police, told the same news conference.

D'Amico, who said police had intended to apprehend Sweat without using force if possible, said he did not know when the two fugitives parted ways during their three-week trek.

Security was tight outside the Alice Hyde Medical Center in Malone, where Sweat was taken.

"I think a lot of people are going to rest easier tonight," said Jessica Randall, 38, of Malone, who was shopping with her husband when she saw a convoy of police vehicles speed by.

CNN showed footage of an ambulance and several police cars leaving the hospital in Malone, and said Sweat was being taken to a hospital in the state capital, Albany.

Capturing the suspect alive should enable New York state prison authorities to learn more about how the pair managed to break out and use that information to tighten security.

In their audacious break-out, the pair cut through cell walls, climbed along a catwalk, shimmied through a steam pipe and emerged from a manhole outside prison walls, authorities said.

Matt, 49, was shot and killed on Friday near Malone, about 27 miles (43 km) northwest of the maximum-security prison, by a member of the U.S. Customs and Border Protection tactical unit.

Autopsy results released earlier on Sunday showed he was shot three times in the head and died of severe skull fractures and brain injuries.

Matt also had bug bites, blisters and minor abrasions "consistent with living in the woods for three weeks," the New York State Police said in a statement.

The manhunt for the pair had scoured a remote, heavily wooded area where law enforcement agents worked around the clock in scorching weather and driving rain using infrared devices and listening posts.

The New York Daily News published on Sunday what it said was an exclusive photograph of the pair walking in sunlit woods, taken by a trail camera, while they were on the run on Wednesday. In the picture, one of them appears to be holding a shotgun or rifle.

Sweat's DNA had been found on a pepper shaker, about a mile from where Matt was shot, in an effort to throw tracking dogs off the scent, D'Amico said.

Sweat had been serving a life sentence without parole in 2003 for killing a New York sheriff's deputy.

Matt was convicted in the 1997 torture, murder and dismemberment of his boss in Tonawanda, New York. After he apparently fired a shot at a passing motorist on Friday, officers spotted and confronted him outside a cabin.

He was shot and killed after he refused to comply with orders to put down a shotgun he was holding, police said.

The Buffalo News has reported that Matt, who turned 49 the day before, may have been intoxicated, citing the owner of a burglarized cabin who said he had found empty liquor bottles.

Two prison workers have been charged with aiding in the escape. Gene Palmer, a 57-year-old corrections officer, is accused of bringing hacksaw blades and a screwdriver bit to the inmates, hidden in frozen hamburger meat supplied by Joyce Mitchell, 51, a training supervisor in the prison tailor shop.