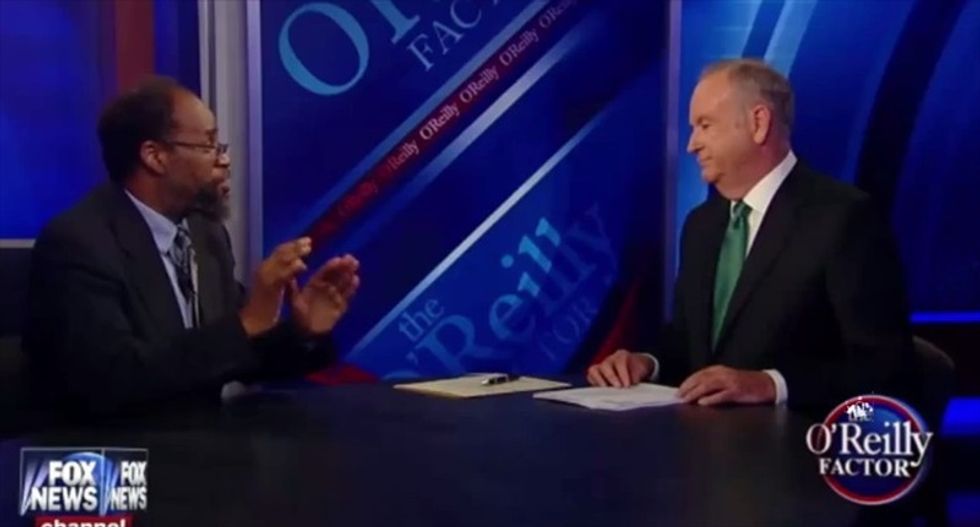 Social activist Michael Meyers called Bill O'Reilly and his network out to his face on Monday, accusing Fox News of engaging in a pattern of demonizing black men.

"You are painting black men as society's moral monsters," said Meyers, who heads the New York Civil Rights Coalition. "Quit it. Quit it."

"I'm not doing that, and I'm going to continue to report the truth," replied O'Reilly, who has previously blamed rap music and singer Beyoncé for social issues.

The interview came less than a week after Meyers ripped the network in an op-ed piece for The Huffington Post.

"If true be told, crime is an individual act; it's an individual thing. Crime is not a racial group or a skin color," Meyers wrote. "In this regard, there is no such thing as 'the black male' much less a 'black male problem' in America any more than there is or once was an 'Italian male problem' or an 'Irish male problem,' when society casually stereotyped and blamed 'the' Italian and Irish communities for organized crime and street gangsterism."

However, O'Reilly said on Monday, Meyers' argument contained a "fundamental mistake," arguing that "Muslim extremists" could only be stopped by law-abiding Muslims, because "the jihad" was the sole province of that community. Similarly, the Italian mafia and Irish terrorists were neutralized from within their own communities.

"You have to look at the statistics of people committing anti-social acts and find out where these acts are occurring and why they're occurring," the Factor host told Meyers.

"Statistics aside, we know that crime has been out of control in America," Meyers responded. "The majority of crimes in America are committed by white people, not black people."

"That's because of the population base," O'Reilly said.

"You and others on Fox News keep talking about 'black people' and 'black violence,'" Meyers argued. "The problem with 'black-on-black violence' is, it's racial rhetoric. Black people are not going after black people because they're black. They are 'killing each other' because they live in the same segregated neighborhoods."