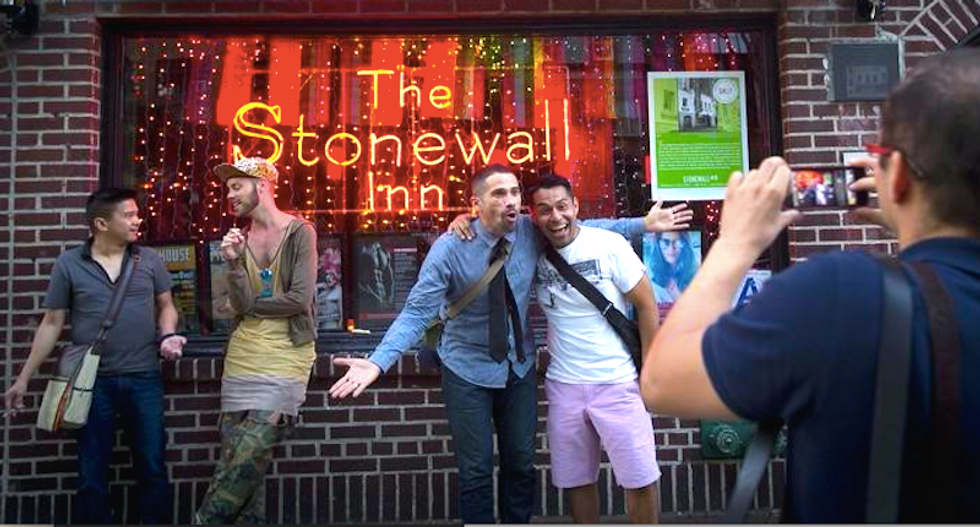 People pose for photos in front of the Stonewall Inn before the start of Pride Week activities in the Manhattan borough of New York June 27, 2014. (REUTERS/Carlo Allegri)

The Stonewall Inn, the bar considered the birthplace of the U.S. gay rights movement, could move a step closer to historical status on Tuesday after a meeting of New York City's Landmarks Preservation Commission.

The commission will decide whether to add the Greenwich Village gay bar, the site of 1969 riots in response to a police raid, to its calendar of public hearings. That typically is the first step to a property securing landmark status, said Damaris Olivo, a spokeswoman for the commission.

"The agency has been working on this for some time and LGBT Pride Month is an ideal occasion to recommend this iconic cultural landmark," said commission chair Meenakshi Srinivasan.

The move follows years of campaigning by gay rights activists including The Lesbian, Gay, Bisexual & Transgender Community Center. Its executive director, Glennda Testone, said if the vote puts Stonewall on its way to landmark status, the gay community would feel "relief that our history will be protected."

"The Stonewall Inn is really an irreplaceable historic location," Testone said. "A site that is so meaningful and represents a time when our community came together and stood up and fought for our right to exist - that's something we never want to lose," she said.

The building started as stables in the 1840s and was remodeled in the 1930s. If it gets landmark status, it would be a first for a site primarily in recognition of its significance to gay history, Olivo said.

Located at 53 Christopher Street, the modest tavern now adorned with a red neon sign and flapping rainbow gay-pride flags was the epicenter of the "Stonewall Rebellion," days of protests after the bar raid.

At a time when few establishments welcomed openly homosexual people, the Stonewall Inn in the 1960s was known to cater to a wide array of gay patrons. Police raided it on June 28, 1969, looking for liquor violations, and met with unexpectedly strong resistance that became a nearly weeklong series of sometimes violent demonstrations against police harassment and was later known as a pivotal moment of the gay-rights movement.

The Stonewall Inn is already part of the Greenwich Village Historic District and was listed on the National Register of Historic Places in 1999 but the city landmark designation would apply more stringent standards on alterations to the property.

"It ensures that our place in history will always be recognized, that there will be a free-standing building that will memorialize all the LGBT people that came before us," said Kevin Nadal, executive director of the Center for LGBTQ Studies at the Graduate Center of the City University of New York.