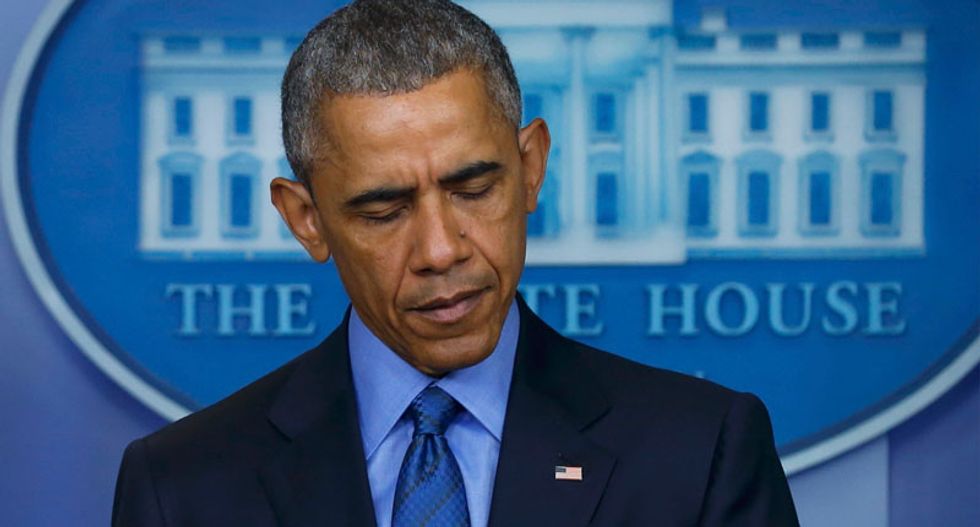 U.S. President Barack Obama delivers remarks in reaction to the shooting deaths of nine people at an African-American church in Charleston, South Carolina, from the podium in the press briefing room of the White House in Washington June 18, 2015. REUTERS/Jonathan Ernst

U.S. President Barack Obama on Thursday expressed anger over the "senseless" shooting in a black church in South Carolina and said Americans had to confront the fact that frequent incidents of gun violence do not occur in other advanced countries.

Obama, in a statement to reporters at the White House, said he and his wife, Michelle, knew Reverend Clementa Pinckney, the pastor of the historic African-American church in Charleston, who was killed along with eight others on Wednesday night.

"To say our thoughts and prayers are with them and their families and their community doesn't say enough to covey the heartache and the sadness and the anger that we feel," Obama said, adding it was particularly heartbreaking that the incident occurred in a place of worship.

Obama has had to play the role of consoler-in-chief after shootings repeatedly throughout his presidency.

Following the 2012 school shootings in Newtown, Connecticut, the president launched an aggressive gun control push, but his efforts largely failed in Congress.

The U.S. Constitution protects Americans' rights to own a gun, but disagreements over the breadth of those rights often fall along political lines.

Obama, appearing somber as well as frustrated, said he has had to make statements like the one he made on Thursday too many times. Despite not having all the facts, it was clear that innocent people had been killed because someone had no trouble getting a gun, he said.

"Now is the time for mourning and for healing, but let's be clear: at some point we as a country will have to reckon with the fact that this type of mass violence does not happen in other advanced countries," Obama said.

"It doesn’t happen in other places with this kind of frequency. And it is in our power to do something about it. I say that recognizing the politics in this town foreclose a lot of those avenues right now. But it would be wrong for us not to acknowledge it," he said.

Obama is unlikely to launch another push for gun control legislation with only one and a half years left in office and the next presidential campaign already in full swing.