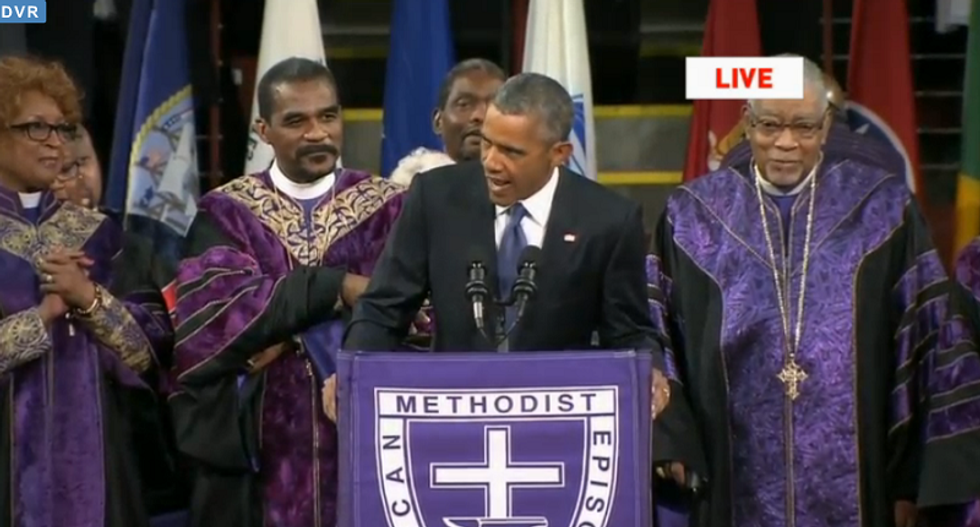 Barack Obama has reached the stage of his presidency where if he wants to break out in song publicly, as he did with “Amazing Grace” in a eulogy on Friday, then he’s going to do it.

With a year-and-a-half left in office, Obama is shedding some of his trademark “no drama” style for a looser approach, admitting that he feels more fearless and liberated.

It may also be in recognition that he has few big-ticket policy achievements left to enjoy in polarized Washington as the end of his two-term presidency approaches.

In a remarkable week for the president, a victory on Pacific Rim trade was snatched from the jaws of defeat on Capitol Hill on Wednesday. The Supreme Court on Thursday validated his signature healthcare law, guaranteeing he would accomplish a central second-term goal, to protect the 2010 Affordable Care Act from being dismantled by Republicans.

The icing on the cake came on Friday with the high court’s decision to legalize same-sex marriage, a move Obama said was a "big step" toward equality for Americans.

After the court decision was announced, Obama took a Rose Garden victory lap.

“Progress on this journey often comes in small increments, sometimes two steps forward, one step back," he said.

"And then sometimes, there are days like this when that slow, steady effort is rewarded with justice that arrives like a thunderbolt.”

Some Obama confidants described a more liberated, even feistier president, willing to mix it up with a heckler inside the White House, as he did on Wednesday. Or willing to use a racial epithet, long abandoned by civil society, to describe black people in urging more racial unity.

Why the change in style? He has more experience now, the president said in a podcast interview last week with comedian Marc Maron.

"Part of that fearlessness is because you’ve screwed up enough times that it’s all happened. I’ve been through this, I’ve screwed up. I’ve been in the barrel tumbling down Niagara Falls and I emerged and I lived … That’s such a liberating feeling," he said.

Eisen has known Obama for almost three decades and maintains that the president's "core is the same." But on subjects he cares deeply about, including race, Eisen said Obama is displaying more of his emotions.

Obama’s speech on Friday in tribute to nine African-Americans killed by a white gunman in Charleston, S.C., was what the black community has wanted to hear from him for years.

This was not simply Obama as healer-in-chief, but a call to action from the president to end racial insensitivities.

“For too long we were blind to the pain that the Confederate flag stirred in too many of our citizens,” he said in a message aimed squarely at white Americans.

Senator Dick Durbin got to know Obama well when the future president was elected to the Senate in 2004 and they both represented Illinois. Durbin was one of the first national

"You've seen a much more forceful president in the last few

months on many issues," Durbin said in an interview, adding it was largely because Obama gave up trying to win over Republicans in Congress with his signature cool-headed reserve.

Except for bonding with Republicans on trade in recent weeks, "he's just had to try to devise ways to reach his goals without bipartisan support of Congress," Durbin said.

Republican lawmakers see things differently, describing a president they say refused to build personal relationships. Often, they said, they left White House meetings feeling as if they were lectured by a chief executive who just wanted to "check off the box" that he met with them.

And he angered many of his Democratic allies too by forging ahead on the free-trade pact.

Where Obama goes from here is unclear. Negotiations over Iran’s nuclear program could result in a deal or could fall apart. Russian aggression against Ukraine continues, and the West’s fight against Islamic extremism is uneven at best.

His long-desired bid for tax reform looks unlikely at this point as the country’s attention turns to the campaign to find a successor to him in 2016.

But for one week at least, Obama had memories of achievements to last a lifetime.