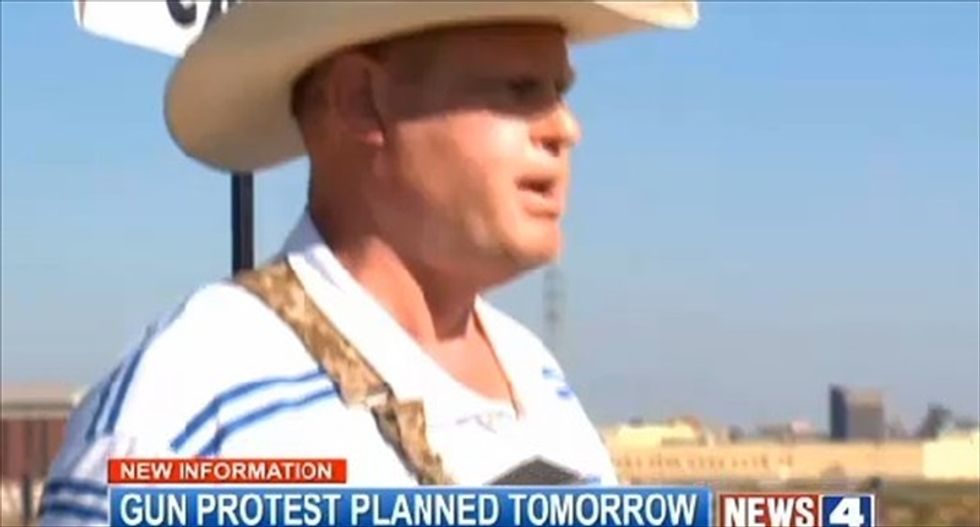 Jeffry Smith during an open-carry rally in St. Louis in October 2014. [KMOV-TV]

Even though his plan to organize an open-carry event inside the St. Louis Zoo spurred concern from local parents, an Ohio gun advocate said on Friday that getting blocked by a restraining order was a victory for his cause.

"I consider this a win," 56-year-old Jeffry Smith told the St. Louis Post-Dispatch. "It's a win in that they have finally shown their hand."

The zoo obtained the temporary order from Circuit Judge Joan Moriarty after Smith announced that he would go into the zoo carrying a handgun on Saturday afternoon to protest the facility's ban on firearms. He had encouraged supporters not to bring rifles or "long guns," but instead bring handguns in hip holsters to the event.

According to Smith, the zoo is subject to the state's law allowing licensed gun owners to "briefly and openly display" their weapons, as long as they are not posing a threat at the time, because it is publicly-owned land. Consequently, he said, the zoo's signs banning guests from bringing firearms inside is not valid.

"That signage, unless it's backed up by case law or statutory law, is nothing more than the zoo’s attempt to reinforce their biases and to deceive people into not exercising their rights," Smith argued. "This is not about protecting oneself from the wildebeests in the zoo. This is about the zoo deceiving people into thinking they don't have that choice."

Zoo officials countered by arguing that the firearms ban is valid because it covers amusement parks and educational facilities. The petition for the restraining order cited a pre-school that "utilizes the entire 90-acre campus of St. Louis Zoo as its classroom" as part of its educational mission, as well as its carousel and railroad rides, which it argued fell under the definition of "amusement rides/attractions."

The petition also said that the zoo had received several calls from parents who were concerned about Smith's intention to bring a weapon inside, and threatened to pull their children out of educational programs at the facility.

Police Chief Sam Dotson told KMOV-TV that he disagreed with Smith's argument, saying, "More guns are never the answer. I think we need to have stronger gun laws and make sure that they are used in appropriate ways."

The restraining order is in effect until June 22, when Moriarty will consider the issue in a hearing. Smith said he still plans to enter the zoo on Saturday, but only carrying an empty holster, arguing that he wanted to see how officials react after asking a friend of his to leave the zoo last week while doing the same.

Watch a report on the zoo's restraining order, as aired on KMOV on Friday, below.

The temporary restraining order, as posted by KSDK-TV, can be read in its entirety here.

Motion for TRO With TRO Attached