On Game of Thrones, revenge is a dish best served never 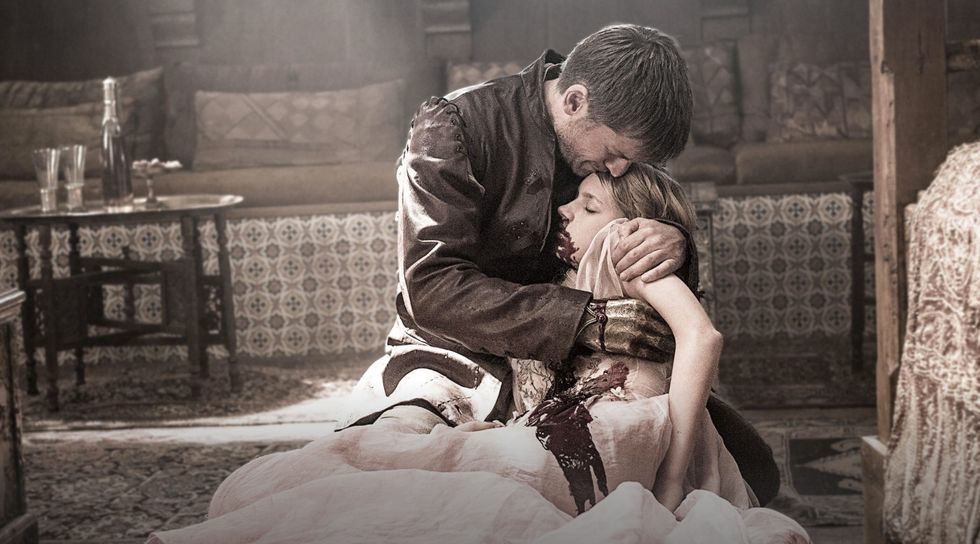 New video on Game of Thrones!

There are going to be reams and reams of writing about last night's season finale of Game of Thrones, of which I will likely contribute my fair share. But what I really liked was that, despite how packed everything was, there was a clear through line about the cost of revenge---and how chasing revenge can often cause you to violate the values you hold most dear.

This was most obvious with Brienne's storyline. I think it's clear, both to Brienne and to the audience, that given a choice between her duty to save Sansa and her duty to get revenge for Renly's death, the former is far more important. If nothing else, Sansa is still alive, and therefore needs Brienne more than Renly does. But also, Brienne's vows to Catelyn and Jaime are still binding in ways that her vow to Renly is not. Brienne knows this and it's never really in doubt. When she leaves her post, you can tell she's thinking that she is going to just dash out for a minute and be right back to continue watching. If she had known Sansa was going to summon her right then, I think she would have chosen differently. But because Brienne gave into that urge for revenge, Sansa is likely badly hurt or even dead.

Of course, being Game of Thrones, things are complicated. Stannis had it coming, and he clearly did not deny it. (Which is the subject of another rant, but I'll just leave it at this: Stannis is not a bad person. He's a righteous man who made bad choices because he was working on really bad information. I think he knew, on some level, that he would pay for killing family members, and so was sacrificing himself as well as them for his supposed destiny.) There was something beautifully poetic about Stannis's end coming because of his first great transgression. But as satisfying as that was, the cost was just too high: Sansa paid for Brienne's thirst for revenge.

Same story with the Dorne storyline. Now, that was terribly executed, don't get me wrong, but I appreciated the way it ended. Ellaria and the Sand Snakes get "revenge", but they do so at the cost of violating a principle that Oberyn held dear to his heart, which is the protection of innocents, especially women and children. Oberyn swore to Cersei that they do not hurt little girls in Dorne, and I think we're all meant to believe he didn't mean it. If he knew what Ellaria had done, he would be horrified. Oberyn died trying to get revenge, so he's not guiltless, but at least he focused on holding the right people accountable. Lest there be any doubt whatsoever that Oberyn had a much clearer, more justice-oriented view of these things, let me remind you that he tried to save Tyrion's life, showing that he had a strong grasp of the principle of not holding children---Tyrion was probably about 10 when Elia died---accountable for the sins of their fathers.

So, in order to atone for Oberyn's death, Ellaria had to violate everything he stood for. That's no kind of justice at all. The fact that Myrcella and Trystane were truly going to smooth things over between their families just drives that knife in.

This theme was riffed on with Arya, of course, whose satisfying revenge results in her being blinded. The House of Black and White is cruel to Arya, but I think we're supposed to also wonder if they don't have cause, even if they take it way overboard. They have a solemn, religious duty she claimed to believe in, and she was basically lying to exploit them for her own revenge.

All of which leads us to Jon Snow's death. In the book, it's a little more complicated, in that his betrayers are trying to stop him from making certain decisions they think violate their vows as Night's Watchmen. And while there were hints of that on the show, it was positioned more as an act of revenge, a way to get back at him for making nice with wildlings.

Talk about an act of revenge that is clearly a violation of their greater principles. The Night's Watch was established for one reason and one reason only: To fight the White Walkers, full stop. The battles with the wildlings are a classic case of mission drift, something that started when wildlings started pillaging villages in the areas around The Wall, known as The Gift, that the Night's Watch uses for supply and support. Not that the Night's Watch was wrong to defend themselves, of course. But Jon fixed that problem and created a real peace with the wildlings. And the Night's Watch revenged themselves right into completely abandoning their main mission, to protect the realms of men from the army of the undead. They killed the guy who is supposed to save them all.  And, while I do think Jon is coming back, probably not until all those who killed him pay for taking a petty act of revenge.