On sainthood and the use of swimming pools 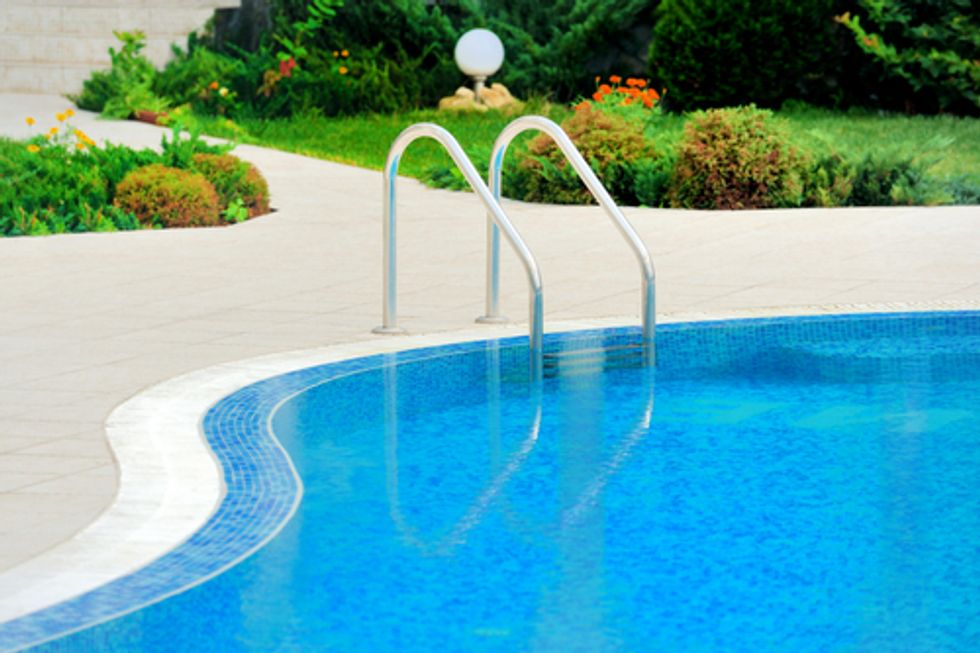 The go-to argument on the right to defend police brutality these days is that black people have to "earn" basic human rights that white people take for granted, so I suppose I shouldn't be surprised that Megyn Kelly went there in response to that horrible video from McKinney, TX, where you see a cop named Eric Casebolt wrestling a  bikini-clad teen girl to the ground and sitting on her to hold her there.

“The girl was no saint, either,” Kelly says. This is pretty standard rhetoric in right wing circles these days, to argue that anyone, so long as they are black, who fails to achieve sainthood by age 15 is therefore eligible to be treated however some sadistic white asshole wants, or even killed. That's why it's standard for the right, when trying to justify a murder or beating of a black person, starts digging around to find dirt on the victim, even though it never makes any logical sense. (For instance, the "But Trayvon Martin smoked pot!" gambit assumes both that smoking pot should result in a vigilante dishing out death sentences---though only to black people, as many to most white people who say this have also smoked pot at some point---and that George Zimmerman could somehow tell just by looking at him that Martin was a pot-smoker. Neither makes a bit of sense.) So no surprise, I thought as I read the "no saint" headlines, that the right has gone a-digging to find some reason that this girl "deserved" to have a cop twice her size put his hands all over her barely clad body and then hold her face down in the dirt while he mounted her. Did she get a C in algebra? Did she smart off to an adult once? Did she listen to rap music?

No, apparently her disqualification for sainthood---which means, in conservative eyes, her disqualification for personhood---is that she didn't immediately and apologetically accept the assertion that black people aren't welcome to use the swimming pool. “He had told her to leave, and she continued to linger. When a cop tells you to leave, get out," Kelly said. I doubt very much her belief that police get to make up the law on the fly and that you have to obey no matter what applies to white people.

The girl's defenders say she was trying to leave, and it sure seems that way on the video. Which makes sense: She's a teenager, and teenagers are used to adults on power trips bossing them around for not good reason.

But I think it's critical to realize this is about a lot more than the cops using "excessive force". That assumes that it's the how that was the problem here, and not what the cops were trying to accomplish---clearing black people out of the pool so as to avoid offending the delicate sensibilities of white people who get constipated at the sight of black teenagers goofing off and acting like teenagers. But in reality, one feeds the other. Once you buy into the idea that it's illegitimate for black people to use the white people pool, then the violence and degradation that comes from enforcing that unspoken rule is inevitable.

Oh, I know what the defensive people will say: "You don't know that was what was happening! Maybe those kids were being rowdy and totally breaking the rules and you know that once you break the rules, any response, no matter how violent, is justified, and I promise that belief extends to the kids of white Republicans because I know that my supposed conviction will never be tested!"

I think there's a few factors here that one really needs to digest before deciding that this is totally not about racism.

McKinney is one of those places that used to be a small town, but in the past couple of decades has seen its population explode as it morphs into an exurb of Dallas; think of it as a place for people who feel that Plano is just a little too close to the actual city (after all, the light rail even has a stop in Plano) for their tastes. The neighborhood captured in the video is Craig Ranch, described on its website as "the nationally acclaimed master-planned community in North Texas that provides beautiful green vistas and a healthy appreciation of a luxurious comfortable lifestyle." Golfing opportunities are prominently and repeatedly highlighted.

That part of Texas is one of the most segregated in the country and the city had to settle a lawsuit that accused them of housing discrimination.

As for the claim by some in the area that the kids didn't belong there, well, the evidence for that claim appears to be strictly appearance-related. The girl who was pinned to the ground was invited. The party was advertised on social media:

The pool party was advertised on social media. Homeowners say none of the nearly 70 people were allowed to be there http://t.co/pZZy9htEK3
— Zahid Arab (@Zahid Arab) 1433694117.0

There were no drugs or alcohol there, it appears. Not a lick of evidence has emerged to suggest this was anything but what it looks like: A bunch of kids goofing off at a pool after a friend who lived in the neighborhood invited them.

True, teenagers are themselves a marginalized and heavily policed class of people, and if it had been a bunch of white teenagers, the cops probably would have gotten a cranky "why are people having fun when I don't approve make it stop" phone call. But does anyone really believe that it would end with a blonde 15-year-old pinned under some big ol' weirdo cop while his friends shake their guns at her white friends?

Jamelle Bouie at Slate has an excellent rundown of the history that informs what the fuck happened here. Swimming pools, he explains, have always been a particularly heated topic when it came to conflict between segregationists and desegregationists. When desegregationists won the right to shared public pools, it basically caused most white people to quit swimming in them altogether:

By the 1960s, however, the millions of Americans who had previously spent their summer days at public pools had abandoned them. The era of the municipal pool was over. The reason, explains Wiltse, was desegregation. The rise of public swimming had coincided with the Great Migration and the hardening of the racial caste system, North and South. Middle-class whites who were willing to swim with working-class immigrants—a major shift from the early 20th century, when pools were segregated by class—refused to share water with blacks. They didn’t just fear racial contamination—citing well-worn statistics about black mortality rates in Northern cities—they feared miscegenation. “They feared,” writes Wiltse, “that black men would act upon their supposedly untamed sexual desire for white women by touching them in the water and assaulting them with romantic advances.”

Instead, he explains, white people built pools in private clubs, in gated communities, in backyards, wherever they could exert some control to minimize the number of black people that had access to one of them. The pool in question here---only accessible through a keycard, invitation-only---is a semi-private pool. That likely explains why some white people couldn't believe a bunch of black teenagers were using it.

Racists have long seen black people in pools as a sexual threat, and this image of a fully clothed white man pinning down a black teenage girl in a bikini really sums it all up, doesn't it?

Updated for clarity on description of the Craig Ranch pool.