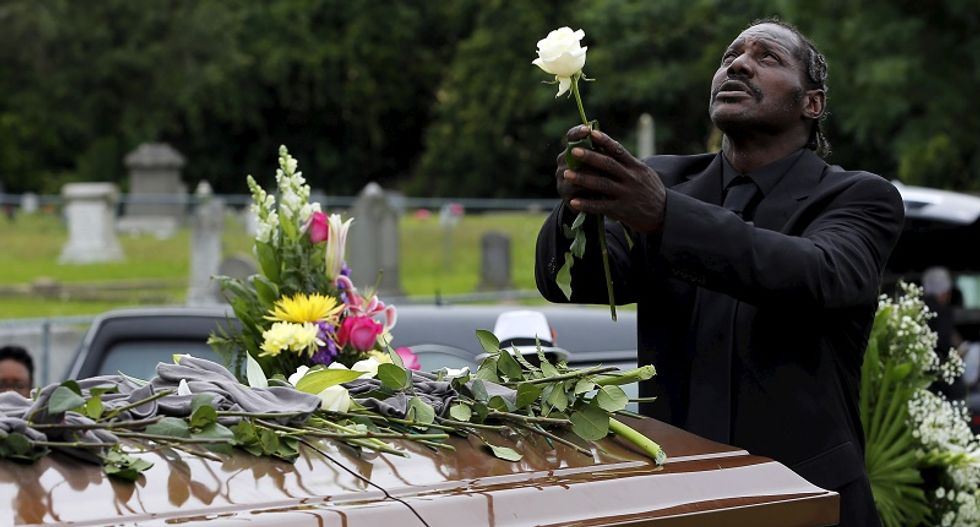 Gary Washington stands over the casket of his mother, Ethel Lance, as she is buried at the Emanuel African Methodist Episcopal Church cemetery in North Charleston, South Carolina June 25, 2015. REUTERS/Brian Snyder

America in 2015 careens violently between its ugly historical bigotry and immense social progress.

Friday the country woke to a surreal, anachronistic scenario where the Supreme Court ruling that essentially legalized same-sex marriage moved the country forward. The same day, a state senator and civil rights leader who was assassinated when a white supremacist attacked a black church, in an act more deadly than the infamous 1963 bombing of 16th Street Baptist Church in Alabama, was laid to rest.

State Senator and Reverend Clementa Pinckney, 41, was laid to rest on Friday with a moving three-hour memorial service and thousands overflowing Charleston's largest stadium, TD Arena. Pinckney was one of nine slain last Wednesday when a gunman opened fire on a Bible study at Charleston's landmark black church, Emanual AME. The service was attended by prominent leaders and figures, with Pinckney eulogized by President Barack Obama.

Dylann Roof, a self-proclaimed racist, was arrested and charged with the massacre.

Though speakers at Pinckney's service lauded the imminent removal of a Confederate flag flying over South Carolina's statehouse, Pinckney's body lay yesterday in such close quarters with the still-flying flag that they shared the same camera frame.

Simultaneously, people celebrated all over the country when the Supreme Court ruled 5-4 that state bans of same-sex marriage are unconstitutional in Obergefell v. Hodges.

"Their hope is not to be condemned to live in loneliness, excluded from one of civilization’s oldest institutions," Justice Anthony Kennedy wrote in his moving opinion on the landmark case. "They ask for equal dignity in the eyes of the law. The Constitution grants them that right. The judgment of the Court of Appeals for the Sixth Circuit is reversed."

Meanwhile, conservatives responded to the ruling with an aggrieved sense of victimhood — recalling the shooter’s fears about blacks "taking over our country."

Glenn Beck echoed this unfounded paranoia that legalized same-sex marriage will somehow result in persecution of Christians, saying, "Within five years, the congregations, 50 percent of the congregants will fall away from their church because they won’t be able to take the persecution."

In 2013, President Obama linked gay rights in the struggle for civil rights, saying equality is "the star that guides us still; just as it guided our forebears through Seneca Falls, and Selma, and Stonewall." The Stonewall Inn riot of 1969 in response to a routine police raid resulted in violent protests in New York City that galvanized the gay rights movement.