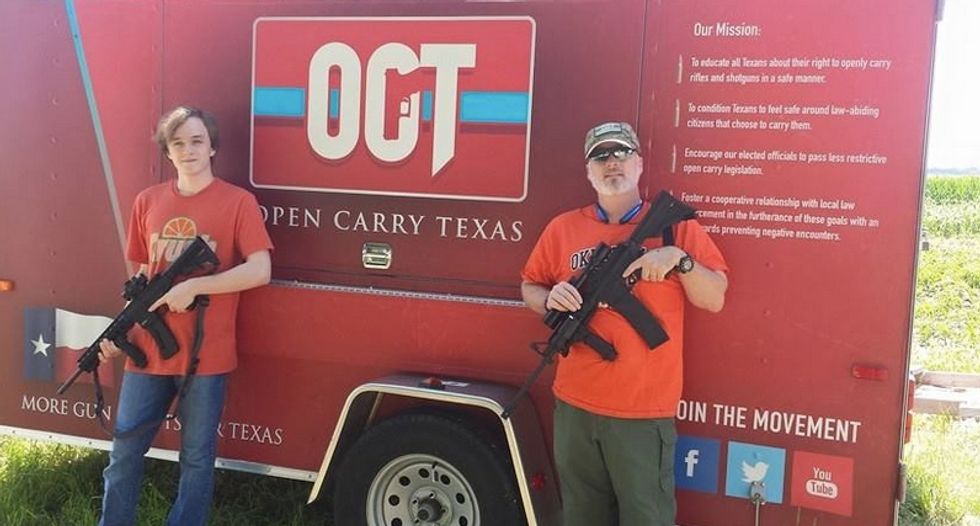 The Abilene chapter of gun proliferation advocacy group Open Carry Texas posted a YouTube video on Wednesday, showing president CJ Grisham argue with police officers over his right to stand on a corner with two colleagues and an assault weapon each, strapped to their backs.

Open Carry Texas says the clip shows footage of "an impromptu open carry near downtown Abilene after business hours." Grisham shoots the film, which begins when he observes police near the street corner where he and two armed colleagues are standing.

"Whoa, whoa, whoa! What are y'all doing? What are you doing, man?" Grisham shouts toward the officers. "What the hell? We're not breaking any laws."

Grisham instructs one officer to order "[his] man" to "stop threatening me" and to "stand down."

"He's over there with an AR-15 in his hand!" Grisham shouts. "He's telling me to drop my guns right now." Dude points his finger toward a figure hiding in the distance. "Look at him. He's at the ready. He's got his hands on the pistol clip and everything." Two officers begin to walk toward Grisham.

"I got my gun behind me and you guys are coming over here with your hands on your rifles like I'm a threat," Grisham exclaims. When police attempt to speak with Grisham, he announces, "I want your hands off the rifles before I get comfortable."

Grisham tells officers that he is within his rights to loiter roadside with high-powered weapons. "This is public property," Grisham says. The cop, however, informs Grisham that he has actually been standing on private property, and that he and his cohorts are guilty of criminal trespassing.

Grisham asks why cops felt compelled to give a warning armed with AR-15s. When police pointed out Grisham too was in possession of a large weapon, he dismissed the concern since the gun was "on [his] back."

"I'm a law-abiding citizen. I'm minding my own business," Grisham complains to police. "Do you know why I'm feeling this way right now?"

"I feel threatened," Grisham explains loudly, "because you are a police officer and you have people with rifles here that are threatening me."

Grisham and his partners in crime elected to leave rather than escalate their dispute with law enforcement. But when he gets to his car -- a silver minivan with an Open Carry Texas logo on the front driver's side door -- Grisham turns back toward cops to shout at them first before getting in. "You guys wanna come up on us like we're some sorta terrorists, then I'm gonna respond in kind," Grisham yells toward police, before exchanging a few more tense words, and driving off.

Open Carry Texas' description of Grisham's clip says it shows police acting "in a less than professional manner." After the gun advocacy group contacted "senior leadership," however, "they admitted that the officers were wrong, apologized, and promised corrective actions and retraining."

The video's opening statement says the film is "a training opportunity for law enforcement around the state on what NOT to do when encountering law abiding citizens exercising their right to keep and bear arms. Aggression only leads to needless escalation. We encourage officers to approach armed citizens with caution, but with courtesy. These types of encounters only serve to create division and distrust between the citizenry and police if allowed to continue."

Grisham tells local news outlet KTAB that "an armed society is a polite society." Guns are "not designed to kill," Grisham tells reporters. "They're not designed to shoot up movie theaters and schools. We're trying to show what law abiding citizens look like that carry firearms and really remove that stigma."

"They hope that their efforts of the day did not go unnoticed," KTAB adds.

In 2012, Grisham had to pay a $2,000 fine for "interfering with police duties" when police stopped him walking along a road near an airport with an assault rifle and his young son.

"It's getting to where a guy can't open carry in peace anymore," Grisham complained Twitter when he posted the video of his recent encounter with Abilene law enforcement. In his Twitter profile, Grisham writes, "I don't pull punches. I'm an Oath Keeper, a veteran, & I'm not afraid to speak my mind. I own my opinions & won't apologize for them. Liberty, justice, freedom."

Grisham recently launched a Facebook page on which to chronicle developments in his career as an aspiring politician. A screenshot of Grisham's announcement earlier this month that he is going into politics:

Watch Open Carry Texas freak out at Abilene police for asking about the weapons they're standing around with on private property: