Pallin' around with racists: Five neo-Confederates Rand Paul employed or embraced since 2009 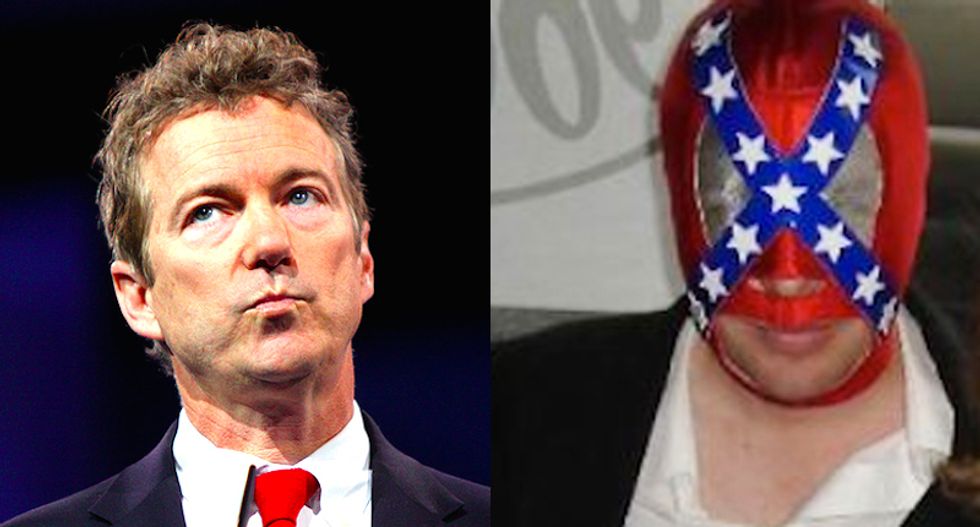 Today, Senator Rand Paul (R-KY) came out against the Confederate flag, calling it “a symbol of human bondage and slavery.” But Paul has a long track record of embracing and defending neo-Confederate, white supremacists.

In April of this year, Rand Paul listed a book by Thomas Woods on his since-deleted "recommend reading list." Woods is a founding member of the League of the South, a white supremacist group that advocates for secession of southern states. A police officer in Alabama was fired on Friday because of his affiliation with the group.

In 2012, Paul sat down for an interview with Woods, a regular defender of the junior senator from Kentucky's political career.

In 2014, Paul put the weight of his endorsement behind Greg Brannon, running for U.S. Senate out of North Carolina. Brannon has an extensive history of going on the record to lobby for a Confederate revival.

Paul could hardly have been ignorant of Brannon's racist baggage when he went to bat for the candidate last year. In 2012, Jamelle Bouie at the Daily Beast wrote up a comprehensive history of Brannon's stated belief in white supremacy.

"[Brannon] opposes public education, rejects the Supreme Court’s jurisdiction over national law, and has lent his support to a pro-nullification rally held by the League of the South, a self-described 'Southern nationalist' organization that is an obvious vehicle for neo-Confederate and white supremacist ideas."

Also in the spring of 2014, Paul was one of the earliest defenders of Cliven Bundy, a Nevada rancher whose protest against federal grazing fees drew in a large number of supporters enthusiastic about taking up arms against the government.

But when Bundy mused on camera that the American "negro" might be better off in the antebellum south "pickin' cotton," Paul and other conservatives quickly distanced themselves from the apparent proponent of enslaving black people; the senator clarified to the media that he does not support slavery.

Hunter resigned from his position on Paul's staff in 2013 after media identified him as the "Southern Avenger," a pro-secessionist radio host.

In character, Hunter wore a superhero costume in the pattern of the Confederate flag. Hunter is on record praising John Wilkes Booth, the man who assassinated then president Abraham Lincoln, apparently for formally ending the legal practice of black enslavement in the United States.

“The Founding Fathers most likely would have snatched Lincoln up by his beard and hung him from the nearest tree," Hunter said.

Questioned about Hunter by the press, Paul defended his former employee. Hunter's remarks were "stupid," Paul admitted. As for whether Hunter's embrace of Confederate philosophy was racist? "I see no evidence of that," Paul told the Huffington Post. “Are we at a point where nobody can have had a youth or said anything untoward?”

In 2009, Paul spokesperson Chris Hightower resigned after the media revealed the staffer had -- for two years -- kept the words “Happy N***** Day!” (an apparent reference to the national holiday honoring assassinated civil rights icon Martin Luther Kind) on his MySpace Page, accompanied by a photo of a lynching.

In an interview with the Lexington Herald-Leader, Paul denied Hightower had even done anything wrong. “I have never heard a single utterance of racism from this staffer,” Paul said, “nor do I believe him to have any racist tendencies.”