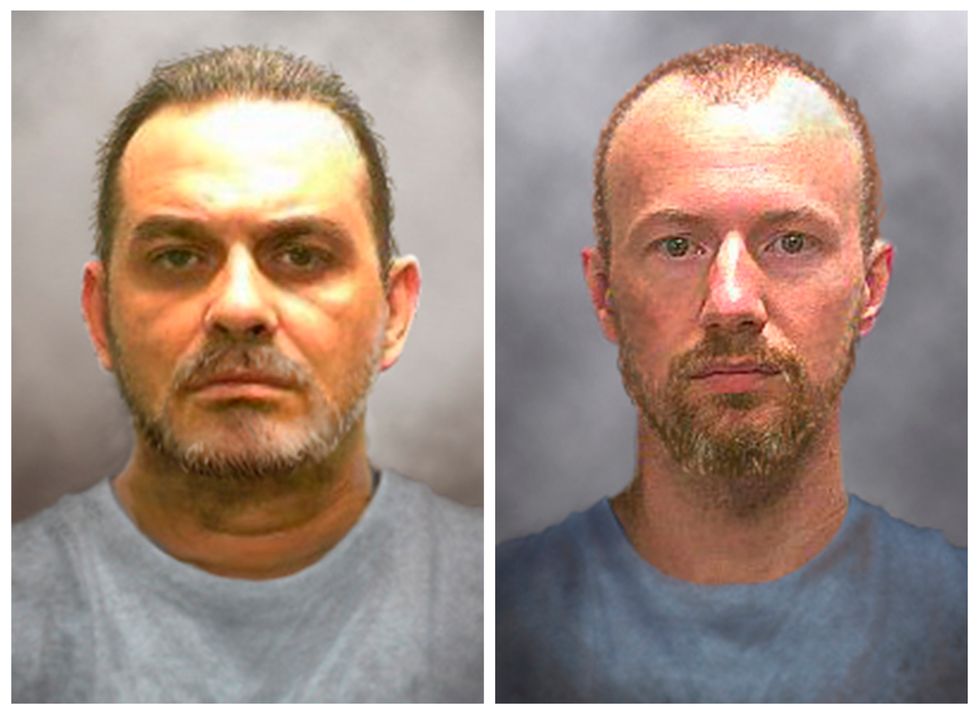 Prison inmates Richard Matt, 48, (L) and David Sweat, 35, are seen in a combination of enhanced pictures released by the New York State police June 17, 2015, showing how they might look after escaping 12 days ago. REUTERS/New York State Police/Handout

Richard Matt, one of two prisoners who broke out of a maximum security prison in New York three weeks ago, was shot and killed by police on Friday and the second escapee was still on the run, according to media reports that cited unnamed law enforcement sources.

Matt was shot in the vicinity of Lake Titus, New York, near the Canadian border, CNN and other media outlets said. Police were in pursuit of David Sweat in woods near where Matt was shot, CNN reported.

Dozens of law enforcement vehicles were converging on an area south of Malone, 27 miles (43 km) northwest of the Clinton Correctional Facility, where the pair staged their elaborate escape and were discovered missing on June 6. The prison is in Dannemora, about 20 miles (30 km) from Canada.

The two convicted killers were believed to have been heading for Canada after searchers in the third week of the manhunt found items they had dropped, police said on Friday.

DNA testing on the undisclosed items was underway to see if they matched Sweat and Matt, said New York State Police Major Charles Guess. "They dropped some items and left others behind," Guess said at a news conference earlier Friday in Malone, about 10 miles (15 km) from the Canadian border. He declined to identify the items or say where or when they were found.

During their escape, Matt, 49, and Sweat, 35, cut through their cell walls and sneaked along the catwalk to a steam pipe, slithered through the pipe and popped out of a manhole outside the prison walls.

Two prison workers have been charged with aiding the escape. Gene Palmer, 57, a corrections officer for 27 years, was suspended without pay from his job, the New York State Department of Corrections and Community Supervision said.

Palmer is accused of bringing hacksaw blades and a screwdriver bit to the inmates, hidden in frozen hamburger meat supplied by Joyce Mitchell, 51, a training supervisor in the prison tailor shop. She also faces criminal charges in connection with the escape.

Palmer also let the men slip behind their cell walls onto a prison catwalk to hide contraband and alter electrical wiring so they could cook in their cells, according to court documents.

Matt was convicted in the 1997 torture, murder and dismemberment of his boss in Tonawanda, New York, and was sentenced to 25 years to life.

Sweat was serving a life sentence after his conviction in the shooting death of a Broome County Sheriff's deputy on July 4, 2002.