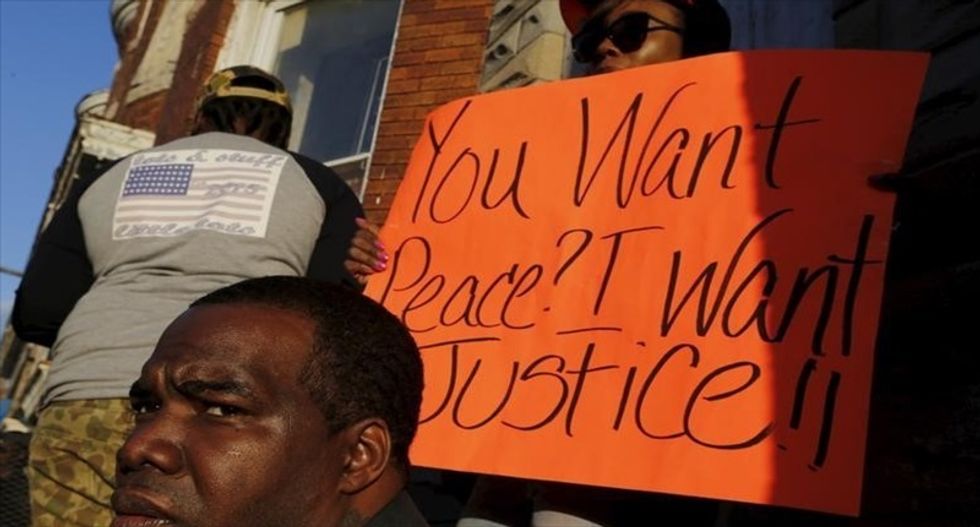 West Baltimore residents watch the scene of celebrations on West North Avenue near the looted and burned CVS Pharmacy as residents demonstrate against police brutality and celebrate the decision to prosecute police officers in the death of Freddie Gray in Baltimore, Maryland on May 2, 2015. Photo by Jim Bourg for Reuters.

Baltimore prosecutors on Friday rejected a defense motion to move the trial of police officers charged in the death of Freddie Gray, saying jurors still could be impartial in the high-profile case.

In a filing in Baltimore City Circuit Court, State's Attorney Marilyn Mosby and Deputy State's Attorney Janice Bledsoe said lawyers for the six officers relied upon an outdated view of how prejudice should be measured.

"They misconceive the meaning of juror 'impartiality' in high-publicity cases, incorrectly equating knowledge of a crime with prejudgment of the accused," they wrote in the 55-page filing.

"They also ignore 100 years of precedent by asking the court to order removal so soon after the cases have been charged."

Mosby and Bledsoe left open the prospect that the defense could be allowed another chance to move the trial when potential jurors are interviewed at the start of the trial.

Gray, a 25-year-old black man, died in April from a spinal injury suffered in police custody. His death triggered protests and rioting on the day of his funeral, drawing national and international attention to Baltimore.

Attorneys for the officers have argued that the court should immediately order the cases moved from Baltimore because of pretrial publicity.

They cited as a legal argument the "presumptive juror prejudice" doctrine which guarantees due process and a fair trial under the U.S. Constitution.

The trial is set for October. The officers have pleaded not guilty.

Mosby's office this week also filed a motion for a protective order after Gray's autopsy was leaked to the media on Tuesday.