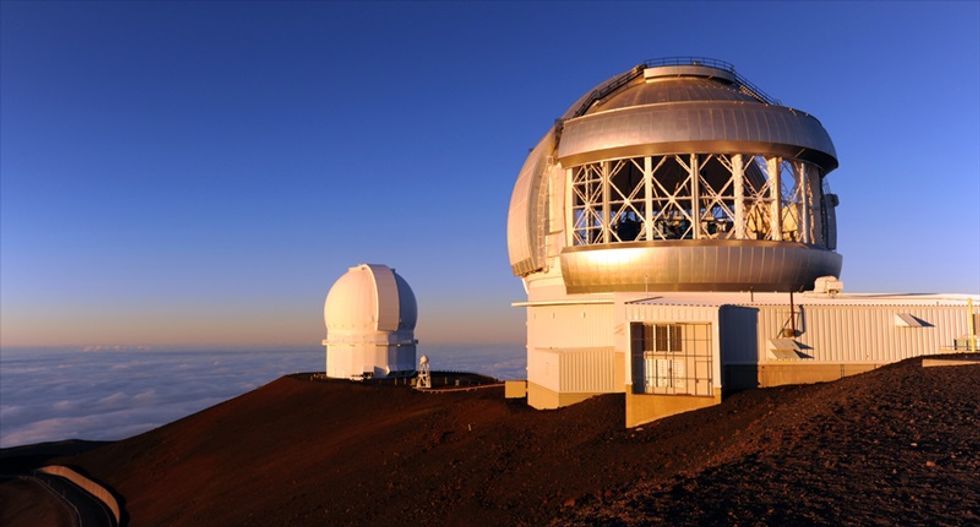 Eleven people were arrested on Wednesday in a protest against what would be one of the world's largest telescopes being built on a dormant Hawaiian volcano, which has sparked a contentious debate over Native Hawaiian rights and sacred lands.

Workers attempted to resume construction of the $1.4 billion Thirty Meter Telescope (TMT) on the 13,000-foot summit of Mauna Kea on Wednesday, but were met by several hundred demonstrators who put large boulders in the path of construction vehicles.

The summit is considered by astronomers to be one of the best places in the world to view the cosmos, but the mountain is also sacred to Hawaiians and protesters have stood vigil on its sometimes-frigid summit for months.

Demonstrators first blocked workers on March 30. A week later, Hawaii County police arrested 31 protesters — a move that prompted Hawaii Governor David Ige to negotiate a timeout he hoped would lead to a resolution.

But protesters, after successfully turning back the construction crews on Wednesday, said they were not going away.

"Mauna Kea is the place of our origin. We were brought into the world here. It is considered the temple of the most supreme being for Hawaiian people," said Kealoha Pisciotta, president of Mauna Kea Anaina Hou, one of the groups protesting the telescope.

"It is also the burial ground for our most sacred ancestors. Our people are not standing down," she added.

The Hawaii Supreme Court has agreed to hear arguments in August on the permit process that allowed the nonprofit Thirty Meter Telescope International Observatory LLC to build and operate the telescope. There are 13 other telescopes at the summit of Mauna Kea already.

Partners in the company include India, China, Canada, Japan and the Thirty Meter Telescope Observatory Corp., formed by the University of California and the California Institute of Technology.

The main thing I remember about that day at the U.S. Supreme Court was how cold it felt. A couple of inches of snow had fallen that January morning in 1984, but the real chill was in the court’s marble halls.

This was back when newspapers had money to spend. The Pensacola News Journal paid for my plane ticket to Washington to cover oral arguments in a voting rights case. It was a big deal because it ultimately led to the election of Escambia County’s first Black commissioner, who also ran the state’s first funeral home with a drive-through window.