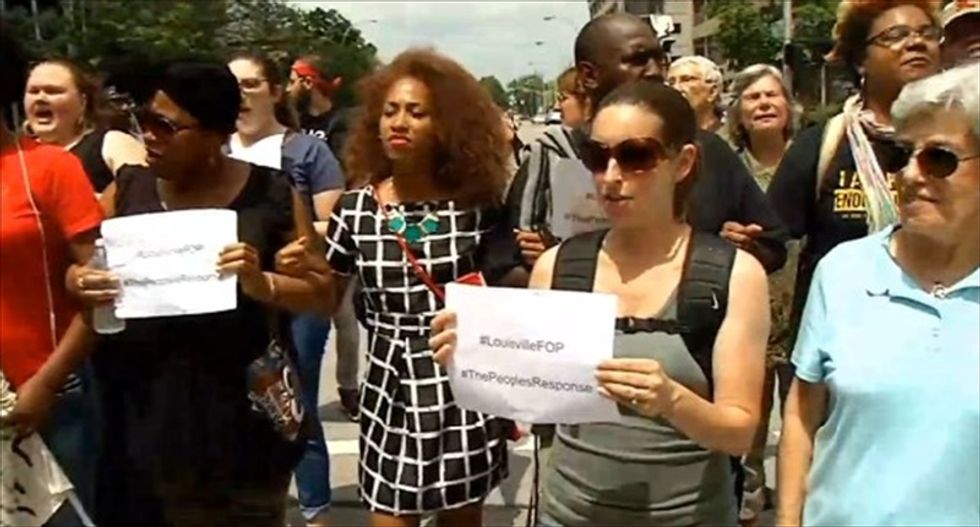 Dozens of demonstrators forced the temporary closure of the Louisville Metro Police headquarters on Monday afternoon in a protest that sought the firing of the local police union leader for his reaction to an officer-involved fatal shooting.

The local Fraternal Order of Police chapter said Thursday in a letter to the community that "sensationalists, liars and race-baiters" were putting Louisville in danger, prompting calls for the resignation of chapter President Dave Mutchler.

No arrests were made during the protest and the headquarters reopened in mid-afternoon, a police spokesman said.

Mutchler, a sergeant on the police force, has reaffirmed his support for the letter in interviews with local media.

On June 13, Louisville Metro Police officer Nathan Blanford fatally shot Deng Manyoun, who was swinging a metal flagpole at the officer before he was shot.

The shooting, one of the latest in a string of officer-involved fatal shootings in Ferguson, Missouri, Cleveland, South Carolina and other communities drew some attention from local residents, though a video recording of the incident appeared to quell concerns.

"Your idiocy and lies are what caused the destruction in Ferguson and other cities around our country and we won't be tolerating that here," the letter from FOP local 614 said.

Louisville Mayor Greg Fischer and Police Chief Steve Conrad condemned the letter as did local activists, some of whom called for Mutchler to resign or be removed from the force.

Fischer said in a statement on Thursday his administration would continue to build relationships "rather than incite anger and distrust between the police and the community."

Not all who attended the demonstration agreed with blocking intersections or the call to fire Mutchler.

Professor Ricky Jones, chairman of the Pan-African Studies department at the University of Louisville, who was at the demonstration, said such demands were unnecessary after the mayor and police chief denounced the union's position. Jones said he hoped union members would remove Mutchler as local president.

Watch a report on the protest, as aired on WDRB-TV on Monday, below.