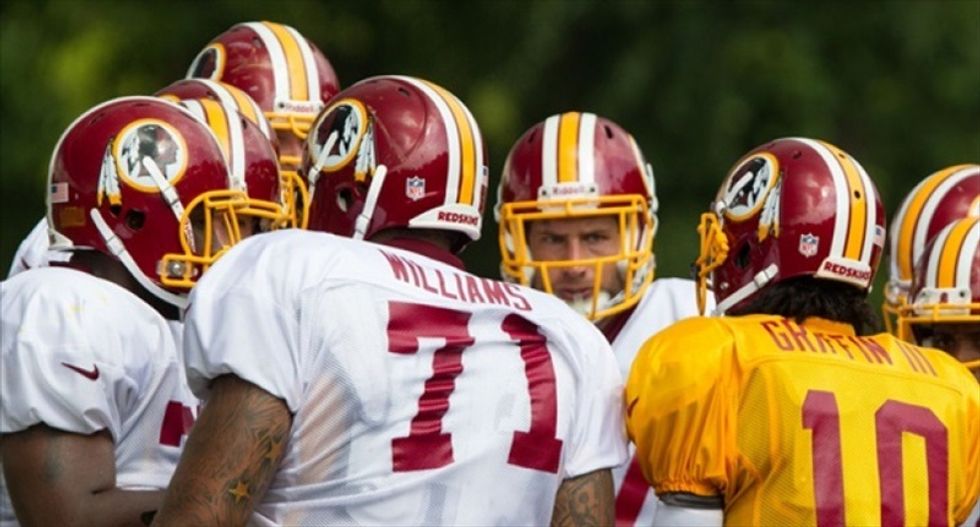 As a California law that would ban schools from using the term "Redskins" for their athletic programs gains momentum, the attorney for Washington D.C.'s pro football team took a curious tack in defending it as the name for their squad, ESPN host Keith Olbermann said on Wednesday.

Olbermann noted that the lawyer, Robert Raskopf, referred to the team's use of the name as "pure private speech," without attempting to characterize it as inoffensive -- the primary argument used by team officials and other supporters thus far in the debate.

As the Washington Post reported, Raskopf made the remark in an attempt to distance the team name from being compared to the Confederate battle flag in the wake of not only the recent public uproar surrounding the flag, but a Supreme Court ruling last week stating that Texas officials were not violating the First Amendment when they rejected a petition by the Sons of Confederate Veterans to offer license plates bearing the banner.

Raskopf compared the team name to the Coca-Cola trademark, telling federal district court Judge Gerald Bruce Lee that it is most often associated with the company, and not any government agency.

"A Coke can is not a license plate," Raskopf said. "This is pure private speech."

But Olbermann rejected the attorney's argument, arguing that a flag can do more than "encourage racism and violence and madness."

Raskopf's remark also came a week after the California state Senate Education Committee approved the ban on the "Redskins" name. The bill, which will now head to the Senate for debate, would immediately affect four public high schools within the state.

But Native American activists are hopeful that if it passes, it could spur similar legislation around the country; according to FiveThirtyEight, 92 percent of the 2,128 teams using Native American-related names are associated with high schools. SportsGrid reported in 2013 that 62 high school share the NFL team's name.

"As some say, as California goes, the country goes," Oneida Indian Nation activist Ray Halbritter told the Huffington Post. "So we're heartened and we look forward to banning [the term]."

Olbermann's commentary, as aired on Wednesday, can be seen below.