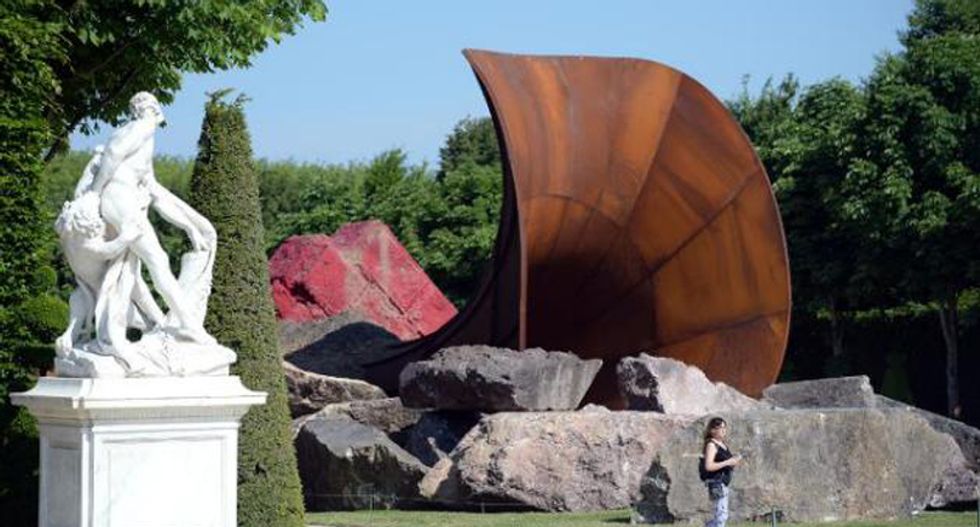 "Dirty Corner", a 2011Cor-Ten steel, earth and mixed media monumental artwork by British contemporary artist of Indian origin Anish Kapoor, is displayed in the gardens of the Chateau de Versailles, in Versailles on June 5, 2015 (AFP)

Vandals have sprayed yellow paint on a controversial sculpture on display in the gardens of France's famed Palace of Versailles that has become known as the "queen's vagina".

"Damage to the work 'Dirty Corner' was discovered Wednesday morning. It was lightly sprayed with paint. The work is being cleaned," the estate's management said.

The 60-metre (200-foot) long, 10-metre (33-foot) high steel-and-rock abstract sculpture by British-Indian sculptor Anish Kapoor, resembling a funnel in the form of an orifice, is set up in the garden aimed directly at the royal chateau, which attracts five million tourists a year.

Inside the palace itself is a smaller work -- a cannon that fired red wax at white walls, symbolising a phallus and an ejaculation of blood.

Some French media outlets have expressed unease at the level of provocation unleashed by Kapoor who has described the piece as "the vagina of a queen who is taking power".

Kapoor, who hasn't said which queen he had in mind when he created the piece, has admitted that the work was "ambitious" but said it was not so over-the-top as the scale of the opulent Versailles.

He later seemed to stepped away from his description of the work as "the queen's vagina", but said he did not see why it was problematic.

"The point is to create a dialogue between these great gardens and the sculptures," he told reporters on June 5.

No one has claimed responsibility for vandalising the sculpture, nor were any complaints registered.

In a statement, local officials from the ruling Socialist Party expressed their "indignation" over the incident, which they branded an attack against freedom of expression.

It is "unacceptable that art, the compass of freedom, suffer because of the obscurantism of some people", they added.

Kapoor's exhibition is one of the most controversial at Versailles since the authorities in 2008 opened the palace and its grounds to contemporary artists.

In 2008, Versailles hosted works by the American artist Jeff Koons, and in 2010 by Japanese artist Takashi Murakami.

In October 2014, vandals in Paris's landmark Vendome square deflated a massive sculpture by US artist Paul McCarthy that was shaped like a sex toy.

McCarthy then decided to take down the work, which had both outraged and tickled Parisians.