Rep. Jody Hice: Christians were tricked into 'false belief' that church and state are separate 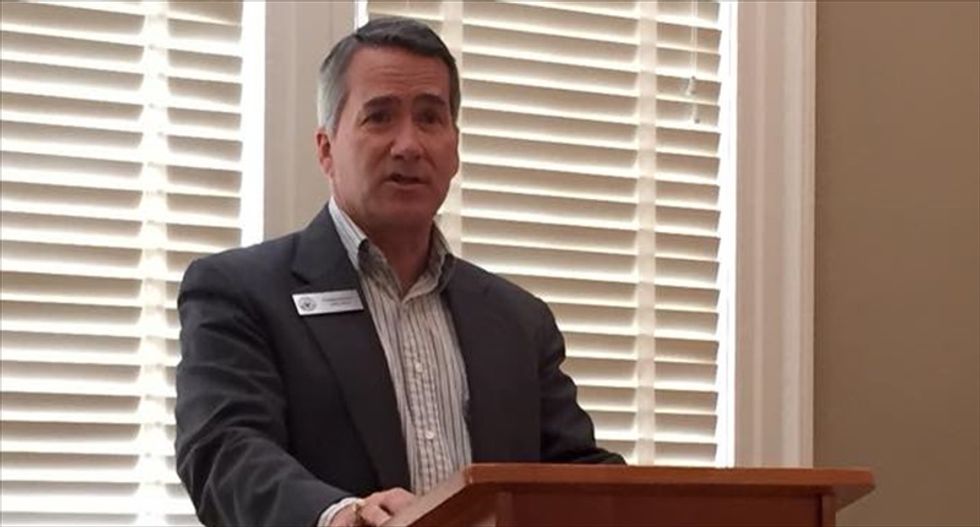 Congressman Jody Hice railed against the separation of church and state in a video statement screened at a San Diego Christian conference, Right Wing Watch reported.

"Somehow we have bought into that false belief that our Constitution forbids us from being involved because of the so-called separation of church and state," the Georgia Republican said in a video prepared for the Future Conference in San Diego. "I'm sure you're aware of the fact that that's not in our constitution. But it's been said so many times that many Christians believe that we ought not be involved."

While the exact phrase "separation of church and state" is not used in the Constitution, Hice did not mention that Thomas Jefferson used it to explain the First Amendment's stance guaranteeing freedom of religion.

"I contemplate with sovereign reverence that act of the whole American people which declared that their 'legislature' should 'make no law respecting an establishment of religion, or prohibiting the free exercise thereof,' thus building a wall of separation between church and State," Jefferson wrote in his 1802 letter to the Danbury Baptists in Connecticut. "Adhering to this expression of the supreme will of the nation in behalf of the rights of conscience, I shall see with sincere satisfaction the progress of those sentiments which tend to restore to man all his natural rights, convinced he has no natural right in opposition to his social duties."

Instead, Hice argued that secular government discouraged Christians from becoming involved because it was corrupt. The congressman also delivered what he called a "historically accurate" rant concerning the dangers of secularism, arguing that a "secular town" required a bigger government because it would produce societal ills.

However, Right Wing Watch also noted that rates of both violent crime and divorce are higher in Southern states where Christian conservatives are the majority.

Prior to being elected last November, Hice brought attention upon himself for arguing that Muslims were not eligible to constitutional protection under the First Amendment.

Hice's remarks regarding the separation of church and state, as posted by Right Wing Watch on Wednesday, can be seen below.

His statements regarding the supposed dangers of secularism, also posted on Wednesday, can be seen here.