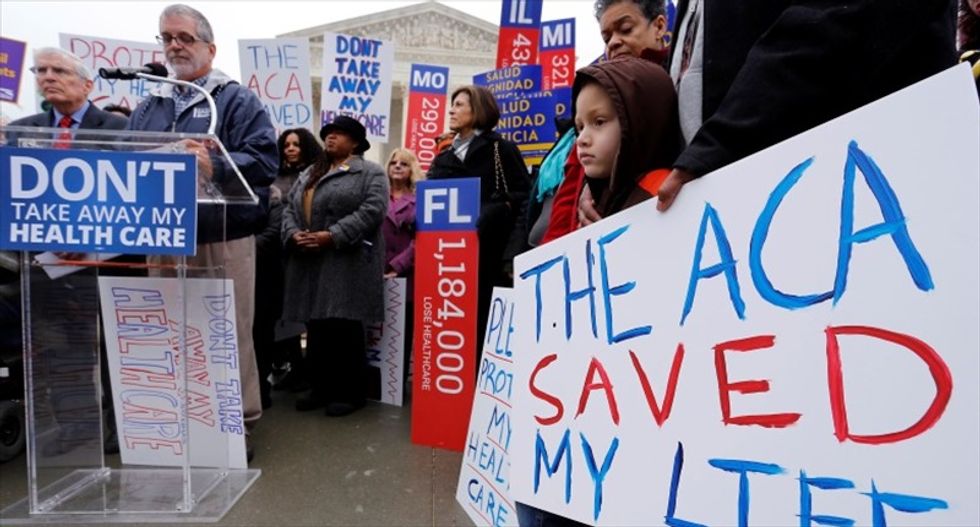 Jumaane Cook (bottom R), age 5, of Cleveland, Ohio stands with his father James Cook (obscured, holding sign at R) as they join Obamacare supporters demonstrating at the Supreme Court building in Washington on March 4, 2015. Photo by Jonathan Ernst for Reuters.

Republicans met behind closed doors in the House of Representatives and separately in the Senate to talk about their options after the court rules in the case, known as King v. Burwell, the aides said. That ruling is expected by the end of this month.

A ruling for the plaintiffs could mean 6.4 million low- and middle-income Americans will lose the tax subsidies that now help them afford insurance premiums when buying plans under the 2010 Affordable Care Act, also known as Obamacare.

The case was brought by libertarian activists. A number of Republicans, long opponents of Obamacare, fear they will take the political blame if millions of Americans lose their coverage.

House Republicans heard several committee chairmen, including Ways and Means Chairman Paul Ryan, sketch out a legislative option to continue the tax subsidies under Obamacare for the rest of this year, Republican aides said.

In 2016, states could opt out of the Affordable Care Act entirely, receiving a block grant from the federal government that would let them "set up whatever kind of (insurance) system is right for their state," one aide said.

If a state does not want to opt out of Obamacare, subsidies would continue to its residents, but they could buy insurance on the Obamacare federal exchange - Healthcare.gov - or elsewhere, the aide said.

The arrangement would end in 2017, compelling a new president and Congress to come up with an Obamacare replacement. The Republican aides stressed that this was not a final plan but a work in progress.

"If the court rules that the president broke his own law, we’ll be ready to act quickly and protect the 6 million Americans who were misled by him," Barrasso said. He did not discuss details. One Republican plan already introduced in the Senate would extend Obamacare subsidies through August 2017.

Republicans, who have the majority in Congress, have been working on post-King v. Burwell plans for months, but have not been able to decide what to do. Some House conservatives do not favor extending the tax subsidies at the core of Obamacare.

Other Republicans were pleased with the draft outlined in the House on Wednesday. "I’ve been saying for years that the president’s health-care bill is so deeply flawed it cannot be fixed, but we aren’t going to let people suffer or have their coverage disrupted through no fault of their own," said Representative Phil Roe of Tennessee, himself a doctor.