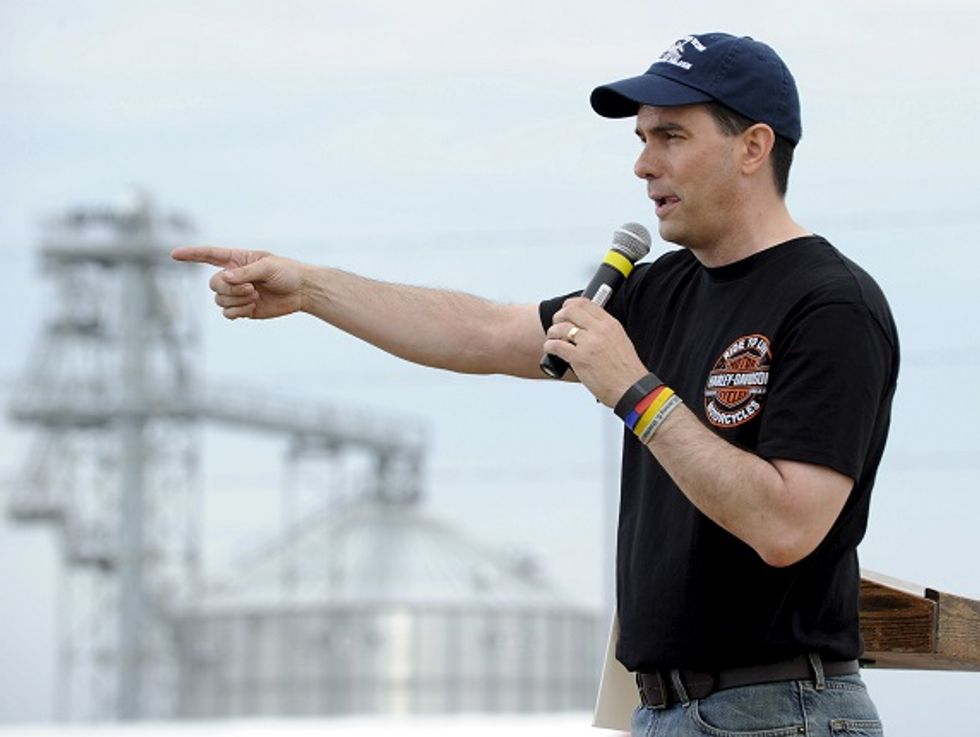 Scott Walker, a likely Republican presidential contender who is riding high in polls in the early voting state of Iowa, was literally the leader of the pack on Saturday at a gathering of 2016 White House hopefuls.

Walker, the governor of neighboring Wisconsin, joined U.S. Senator Joni Ernst at the head of a parade of about 300 motorcycle riders who traveled 39 miles (62 km)to Ernst's inaugural "Roast and Ride," a political event combining barbecue and the roar of Harley-Davidsons.

The spot in front was appropriate for the new front-runner in Iowa, the state that in seven months holds the first nominating contest to pick the party's presidential candidate before the November 2016 election.

Walker, who built his reputation by taking on labor unions, has led the five most recent polls in Iowa, including the respected Des Moines Register poll. The Register showed him with a seven-percentage point lead over four tightly bunched rivals and found he was viewed favorably by two-thirds of likely Iowa caucus-goers.

"If the caucuses were today, he would win. Unless he really screws up, he should win," said Doug Gross, state chairman for Mitt Romney's 2008 campaign and former chief of staff for longtime Governor Terry Branstad.

Iowa political veterans say Walker's popularity stems from his Midwestern background and his appeal to all elements of the state's Republican base, from pragmatic establishment voters looking for a winner to the social and religious conservatives who play an influential role in the state's politics.

But things will get tougher for Walker as he moves into the daily grind of face-to-face campaigning in a state where voters are accustomed to being wooed.

"The next test for Governor Walker is transitioning from the big stage, multi-candidate events to the hand-to-hand combat of retail campaigning and organizing in Iowa," said former state party chairman Matt Strawn.

Walker has not formally declared his candidacy, and he told reporters on Saturday he would make the announcement "probably soon after the end of this month."

The governor also dodged questions about whether he would participate in the state's straw poll in August, a test of strength that traditionally winnows the field. The poll has been criticized for being too expensive for candidates.

Several other contenders, including former Florida Governor Jeb Bush, have said they will skip the straw poll. Without Walker, the state party might be forced to drop it.

Walker, a motorcycle enthusiast who addressed Saturday's crowd in his black Harley-Davidson t-shirt, was one of seven declared or likely Republican presidential contenders to give brief speeches at Ernst's barbecue.

Texas Governor Rick Perry led his own motorcycle ride to the fairgrounds. U.S. Senators Lindsey Graham and Marco Rubio, former Arkansas Governor Mike Huckabee, former business executive Carly Fiorina and retired neurosurgeon Ben Carson spoke but did not participate in the motorcycle ride, although each contender put up a tent at the site to woo voters.

"In our state, we have a law that makes it easy to vote but hard to cheat," he said. "It’s another example of how Hillary Clinton is squarely out of touch with mainstream America."

Republicans at the barbecue said Walker's record of battling public sector labor unions to restrict bargaining rights was a strong selling point - along with his two election wins and a victory in a recall effort in Democratic-leaning Wisconsin.

"My No. 1 thing is I want to support a Republican who can win in 2016, and I think Walker can win," said Ron Tekippe, a computer programmer from Ankeny who likes Walker but is still undecided.