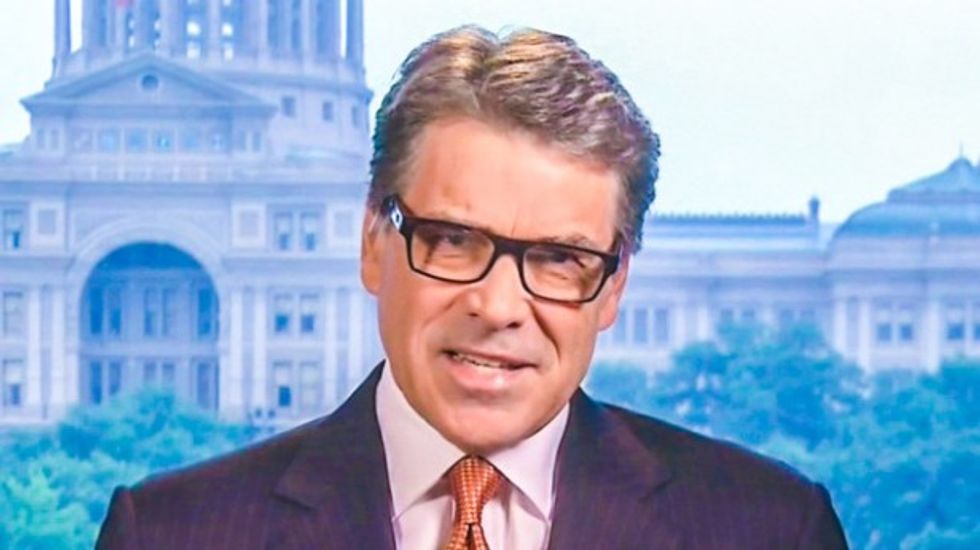 Lingering felony charges, 2012 campaign blunders and Texas economic slump will not help state’s governor as he makes another bid for Republican nomination

Rick Perry joined a crowded field of Republican hopefuls by launching his second bid for the White House with a new campaign website on Thursday - but he faces a daunting task.

“I am running for president because I know our country’s best days are ahead of us,” he said on his new website .

“If we’re going to revive this American dream again, we need a president who provides leadership that transcends the petty partisanship of the last few years - someone that’s been tested,” the former Texas governor said in a campaign video on the site. “We need a president that tells the American people the truth.”

After his 2012 campaign was sunk by a moment’s forgetfulness in a live debate, the former Texas governor’s fresh attempt to win the Republican nomination would arguably benefit from a mass memory lapse by prospective voters.

His ambitions this time around - which he is set to outline at a campaign launch rally in Texas - are complicated by felony charges that are likely to linger in the background as an unwelcome distraction throughout the summer.

A grand jury indicted Perry in August 2014 on allegations that he abused his official powers when he threatened to veto funding for an anti-corruption unit unless Austin’s district attorney, Rosemary Lehmberg, resigned after a drink-driving conviction. She refused and Perry duly withheld the money.

The 65-year-old has called the charges politically motivated and has strongly maintained he did nothing wrong – but his high-powered legal team has so far failed to have them dismissed.

“It’s a major problem for him directly and indirectly,” said James Henson, director of the Texas Politics Project at the University of Texas. “It creates the opportunity for his opponents to offer faux support, even as they remind voters he’s under indictments … I think it’s unlikely that he can ride it out unless something happens and it’s summarily dealt with in his favour.”

Perry’s official announcement at Addison airport near Dallas will underline his military credentials. He is an air force veteran and is backed by popular figures including Taya Kyle, the widow of Chris Kyle, subject of the film and book American Sniper; and by Marcus Luttrell, a retired navy Seal whose book, Lone Survivor, also became a movie.

That will chime with a probable cornerstone of his campaign: border security. Perry spent much of last year lambasting the Obama administration’s immigration policies and trumpeting his largely symbolic decision to send national guard troops to the Mexican border. His tough stance may play well with conservative Republicans who four years ago were concerned that Perry was soft on immigration because of his support for in-state tuition rates for undocumented students.

During his “oops” moment in a Republican presidential debate in November 2011, Perry said he would eliminate three federal agencies but could not remember the name of one of them. The blunder in effect killed off his already faltering campaign.

As he has mulled over making another bid for the White House, Perry has tried to make himself a more credible national figure, surrounding himself with experienced advisers and making frequent visits to key states such as Iowa and New Hampshire. He has said that he underperformed in the 2012 race because of health problems stemming from back surgery.

But Perry is not even the most popular candidate from the state where he was governor for a state-record 14 years. A University of Texas/Texas Tribune poll in February found Ted Cruz leading the way there with 20% of votes. Perry was in fifth with 8%.

Cruz’s presence will mean Perry is battling him in Texas for wealthy donors as well as conservative voters. An average of recent polls by Real Clear Politics has Perry tenth in the race for the nomination with 2.3% , making him a borderline candidate for inclusion in the first televised GOP debate on Fox News in August.

“We’ve seen what classic American values and core conservative principles can do in Texas: set the bar for job creation, economic growth, and border security,” Perry wrote in an email to supporters on Wednesday. In his previous campaign Perry claimed credit for the “Texas miracle” of job creation and economic prosperity while much of the rest of the country struggled. That, along with his political experience as a longtime governor of the second-most populous state, is likely to be a key theme again.

However the oil price downturn clouds the economic outlook for Texas, which led the nation in job losses in March , underlining that the state’s success is heavily dependent on high oil prices and the fracking boom.

Nor did many of Texas’s most vulnerable people benefit under Perry’s governorship. Near the end of his tenure Texas had the highest rate of medically uninsured residents in the US and one of the highest poverty rates in the country. While Perry touted Texas’s business-friendly model of low tax and limited regulation, the state’s child poverty rate increased dramatically , reaching 27% in 2011.