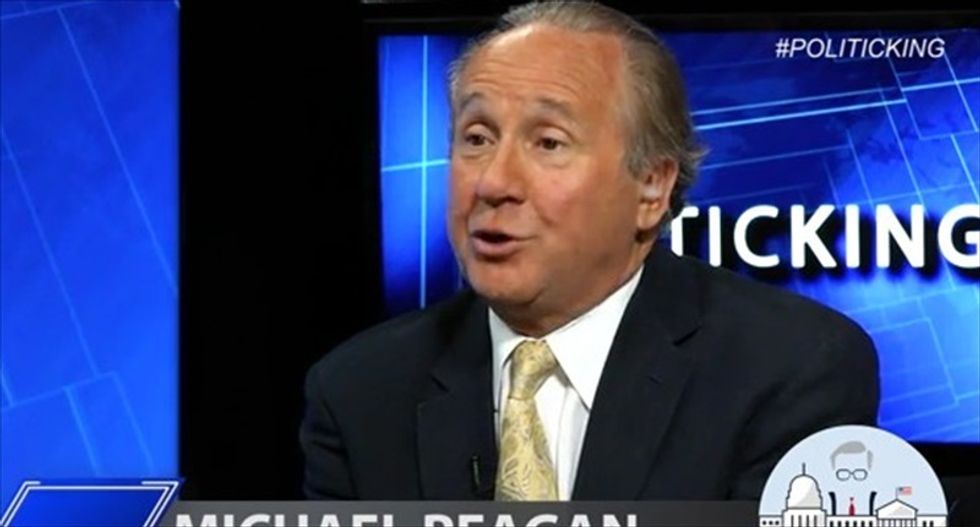 After King asked whether his party was "anti-gay," Reagan, the head of the Reagan Legacy Foundation, noted that while the party has gay members, "the left seems to always want to talk about the gay issues. The problems in America aren't gay issues."

Instead of "social issues," he told King, the 2016 election should center around jobs.

"But if you want the presidency, you'd better advance on the social issues," King replied.

"There's plenty of gays who sit there -- Log Cabin Republicans -- that give money to Republicans," Reagan said. "You hear the loud screams out here 'cause they get ratings. But the reality is, there's a lot of gays in the Republican Party and they support because of other issues other than gay marriage."

While the Log Cabin Republicans do state on their website that they support "free markets, individual liberty, limited government, and a strong national defense" -- all traditional conservative causes -- the group's executive director, Gregory T. Angelo, signaled the importance of same-sex marriage in an interview with CNN this past April.

"The Supreme Court gave Republicans a gift by taking up this issue and taking it up this year," Angelo said at the time. "There will be 17 months of advanced notice that GOP candidates will have to come to the conclusion that I hope they will come to, which is to understand that gay families are here to stay and part of the fabric of this country. For those Republicans who maintain an opposition to gay marriage, it is only going to get more difficult to hold that line."

The organization also announced in March that a sister group, Liberty Education Forum, submitted an amicus brief to the Supreme Court supporting same-sex marriage, noting that it was specifically directed at Justices Antonin Scalia and Clarence Thomas.

"No two Justices on the Supreme Court have been more vocal about their opposition to curtailments of the First Amendment that exist because of restrictions on campaign contributions than Justices Scalia and Thomas," Angelo said about the brief.

On Thursday, King grilled Reagan over the GOP's stance on LGBT issues, telling him, "What's the Republican Party image in the gay community? Poor."

"It is poor," Reagan conceded, adding that the party faced the same problem in the Hispanic community.

"What I'm saying to you, logically, [is] couldn't you make some advances in that area?" King asked. "What've you got against gay people?"

"Listen, you know that two of the biggest fundraisers for my father were two gays who lived out in Palm Desert," Reagan said.

Watch footage from the interview, as posted online on Thursday, below.