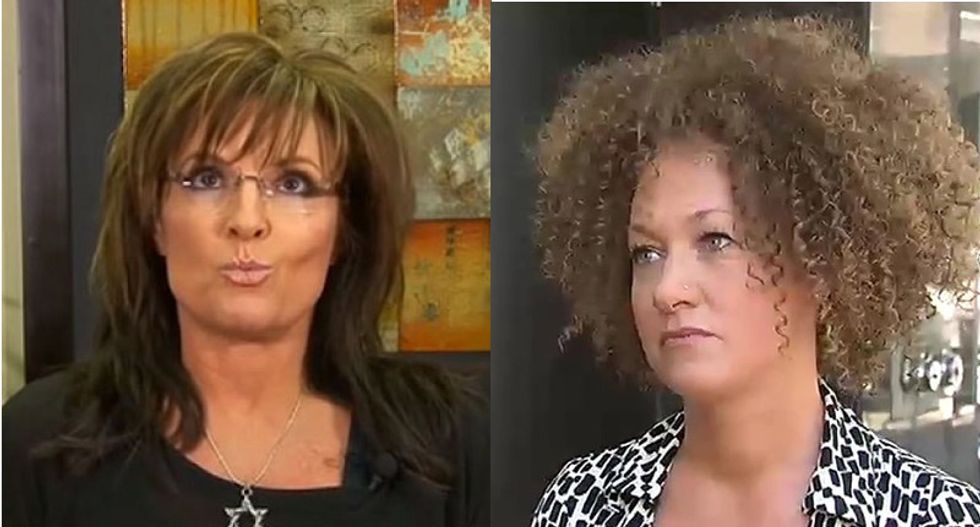 In doing so, she took swipes at what she calls "political correctness" and linked to a Breitbart article confused about "the entire left bursting into spasms of ecstasy over a collectively insane decision to ratify the notion that men can magically become women" while then "struggling to explain how a white woman who identifies herself as black is not, in fact, black."

"Ok, I'm sorry. I shouldn't laugh... this hard," Palin wrote Friday night on her Facebook page. "I know this isn't a victimless crime, what this white chick perpetrated. But it's a most crystal clear picture of so many screwed up things we've let society adopt as the norm."

After noting our "original civil rights freedom fighters are rolling in their graves over the backwards steps we've taken lately," she writes, "It's politically incorrect to call out Elizabeth Warren for falsely claiming she's American Indian, or dinging Obama for just making up his former multi-ethnic girlfriend, and I guarantee I'll be branded a racist for laughing at this Rachel Dolezal story. Whatever. "

She called Dolezal an "unsatisfied lily white leftist" who thought the only thing "less politically correct" than being a white woman is being a "white guy today."

"Can't help but be preemptively amused as I post this and invite Dolzel's defenders wrath to aim and miss at we who won't put up with political correctness destroying truth in America," she wrote.

For some reason, Palin shifted halfway through and went on to brag about graduating from University of Idaho debt free, then rooted "Go Vandals!"

Transgender woman writer Meredith Talusan explains in a must-read article the Guardian why the comparison is a false equivalency.

"People who are alienated from their presumed gender and define themselves according to another gender have existed since earliest recorded history," she notes, while "race is a medieval European invention. Thus, Dolezal identified as black, but I am a woman, and other trans people are the gender they feel themselves to be."