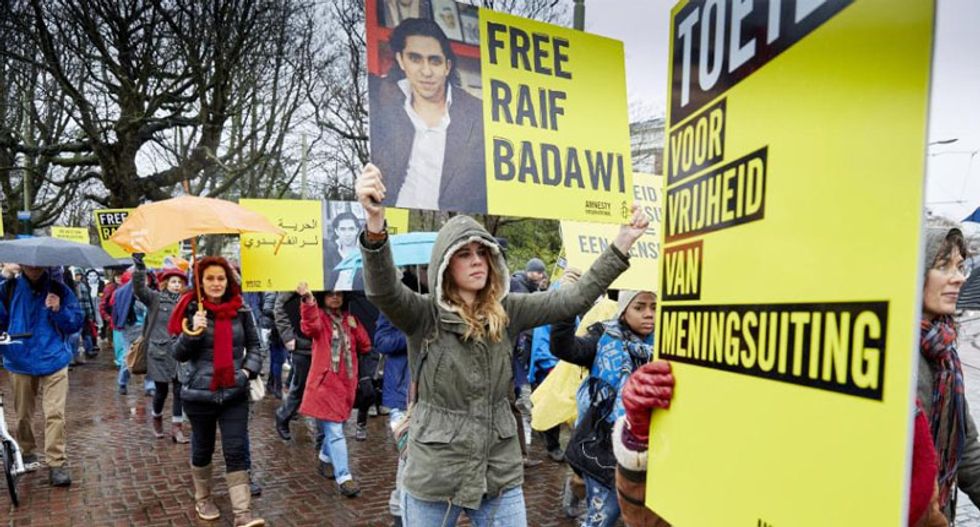 People take part in a protest by Amnesty International for the release of Saudi blogger Raif Badawi, outside the Saudi Embassy in The Hague, on January 15, 2015 (AFP Photo/Martijn Beekman)

Saudi Arabia on Thursday condemned foreign criticism of a 1,000-lash sentence that the kingdom's highest court upheld against a blogger, rejecting "interference" in its internal affairs.

The kingdom "has expressed strong disbelief and condemnation" at statements about the case of Raif Badawi, the Saudi Press Agency said, citing an official source at the foreign ministry.

Rights groups fear he could be flogged again as soon as Friday, despite appeals from the United States, European Union and France for his sentence to be rescinded.

Saudi Arabia's judiciary "enjoys independence and the kingdom does not accept any interference in its judiciary and internal affairs from any party," the ministry source said.

The kingdom's legal code is based on Islamic sharia law.

"Saudi Arabia's supreme court has made clear the authorities are not seeking justice, but to make an example of him and to eviscerate freedom of expression," said Amnesty's Said Boumedouha, adding that the sentence violates the international prohibition against torture and other ill-treatment.

New York-based Human Rights Watch said the "cruel and unjust" treatment of Badawi is part of a broader crackdown on peaceful dissent.

"Saudi authorities believe they are the ones under attack while Raif Badawi waits to be publicly flogged merely for expressing his peaceful opinions," said the watchdog's Joe Stork.

But Badawi's wife said last Sunday that the kingdom's supreme court had upheld that verdict.

"This is a final decision that is irrevocable," Ensaf Haidar told AFP in a telephone interview from Canada. "This decision has shocked me."

She and the couple's three children have been granted asylum in Quebec.

Badawi, 31, received the first 50 lashes outside a mosque in the Red Sea city of Jeddah on January 9. Subsequent rounds of punishment were postponed.

"I was optimistic that the advent of (the Muslim fasting month of) Ramadan and the arrival of a new king would bring a pardon for the prisoners of conscience, including my husband," Haidar said, referring to King Salman who acceded to the throne in January.

He was arrested in June 2012 under cybercrime provisions and a judge ordered the website shut after it criticised Saudi Arabia's religious police.

The network had also announced a "day of liberalism" and called for an end to the influence of religion on public life.

Badawi's lawyer, Walid Abulkhair, who is also a rights activist, is behind bars as well.

Badawi and Abulkhair have been nominated for this year's Nobel Peace Prize by Norwegian member of parliament Karin Andersen.

His supporters have launched a campaign on Twitter using the hashtag #backlash that has gathered momentum. Pictures have been posted of people with lashes drawn on their backs with red lipstick.

The US State Department this week called Badawi's punishment "brutal" while the EU said it is "contrary to human dignity".

Swedish Foreign Minister Margot Wallstrom on Tuesday accused Saudi Arabia of meting out "medieval" treatment to Badawi, reiterating comments that led to a diplomatic row between Stockholm and Riyadh in March.

In his first letter from prison published by the German weekly Der Spiegel that month, Badawi wrote that "this cruel suffering happened to me because I expressed my opinion".