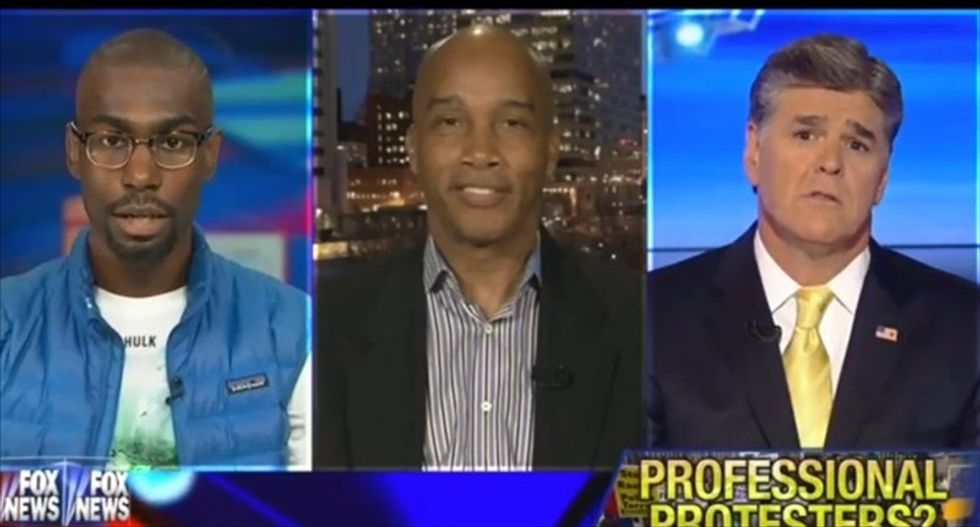 Jackson also accused McKesson of traveling around the US "starting problems" in the hopes of gaining notoriety.

As McKesson went on, Jackson yelled at him, repeating his accusations.

"You should stop yelling," McKesson said. "You want me to feed into this narrative. I've answered the question many times, and I'll say it again to you: I'm going to places like many others, where the police have killed people."

Before McKesson could continue, however, Hannity began chiming in on top of Jackson's yelling.

"Do you believe cops are innocent until proven guilty?" the host asked.

Hannity -- who argued earlier this week that Casebolt could have been "shanked" by black teenagers during the encounter -- began the segment by bemoaning the increase in "anti-police protesters" focusing on "select incidents," and scoffed at McKesson's intent to organize a 501 (c)(3) group to continue his work.

"Is this what you do for a living, you want to set up a 501 (c)(3) tax-exempt organization?" Hannity asked. "Is this your profession now?"

"I'm somebody who's focused on justice," McKesson told him. "Is this a question you're asking me because I'm a person of color? Would you ask white people this, too?"

"It has nothing to do with race," Hannity replied after stammering. "It has to do with, is this your profession? You're tweeting out that you're a professional protestor."

Later, Hannity asked if McKesson had been involved in any "rioting" or "looting," adding, "A lot of minority store owners lost their life's possessions in these riots."

"There has been property damage in some cities, and I've not participated in that," McKesson said.

"Do you still believe that false and proven false narrative of 'Hands Up, Don't Shoot'?" Hannity asked.

"I think that Michael Brown should be alive today," McKesson replied. "And that he was murdered by a cop who used his power because he knew that power would be protected."