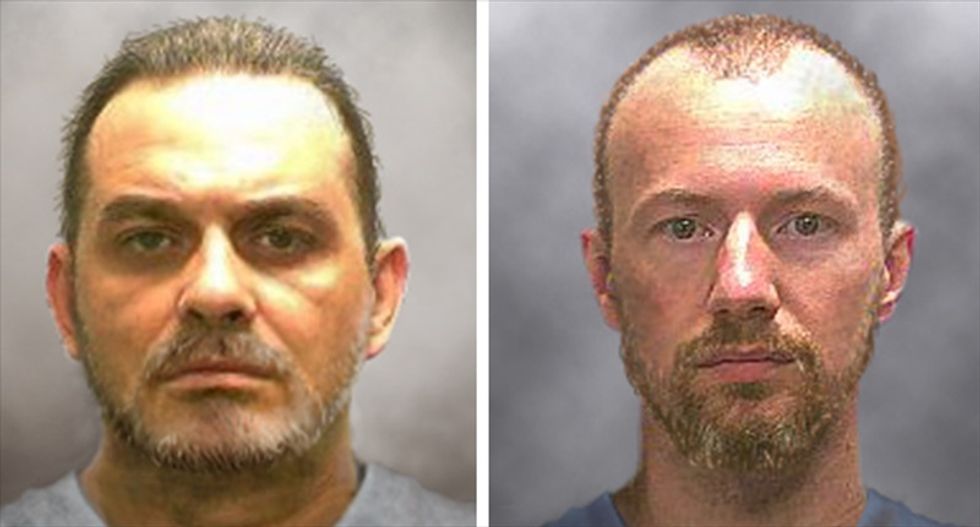 Prison inmates Richard Matt, 48, (L) and David Sweat, 35, are seen in a combination of enhanced pictures released by the New York State police June 17, 2015, showing how they might look after escaping 12 days ago. REUTERS/New York State Police/Handout

A second New York prison employee was arrested on Wednesday for the escape of two convicted murderers who have eluded a massive police manhunt for almost three weeks, police said.

Wylie also said Palmer escorted the men into the catwalk area behind their cells to fix electrical breakers so the inmates could use hot plates to cook food. Authorities have said Matt and Sweat used the catwalks during their June 6 escape.

Matt, 48, and Sweat, 35, cut through the steel walls of their adjoining cells, slipped through a steam pipe and emerged from a manhole outside the prison's fortress-like walls in Dannemora, New York, according to authorities.

They used tools brought into the prison by Joyce Mitchell, 51, a training supervisor in the prison tailor shop, who is charged with aiding their escape, Wylie has said.

New York State Police said Palmer has been charged with promoting prison contraband, destroying evidence and official misconduct. Palmer is set to be arraigned in Plattsburgh Town Court late on Wednesday, the police said in a statement.

Police said the escapees may have at least one gun from a cache of weapons in a cabin where they hid about 20 miles (30 km) from the maximum security prison.

Major Charles Guess of the New York State Police told a news conference that Sweat and Matt were believed to have been last seen entering woods near the cabin in Owls Head, New York, on Saturday.

A bloody sock and other items found at the cabin, which is reportedly owned by corrections officers, were tested for DNA, and Guess said police had "100 percent assurance they were in that area."

Mitchell, the training supervisor, supplied hacksaw blades and a screwdriver bit to the men, whose good behavior landed them on the prison's honor block.

An ailing young whale found near the coast of Athens in a rare sighting has returned to deeper waters after receiving medication, Greek officials said on Saturday.

'Where is Peng Shuai?' shirts handed to Australian Open fans

Activists handed out 1,000 "Where is Peng Shuai?" T-shirts to spectators ahead of the Australian Open women's final Saturday to highlight concern for the Chinese tennis star.

More than a week after security staff ordered activists inside the precinct to remove the shirts, the protesters returned with a thousand more to give to those arriving at Melbourne Park.