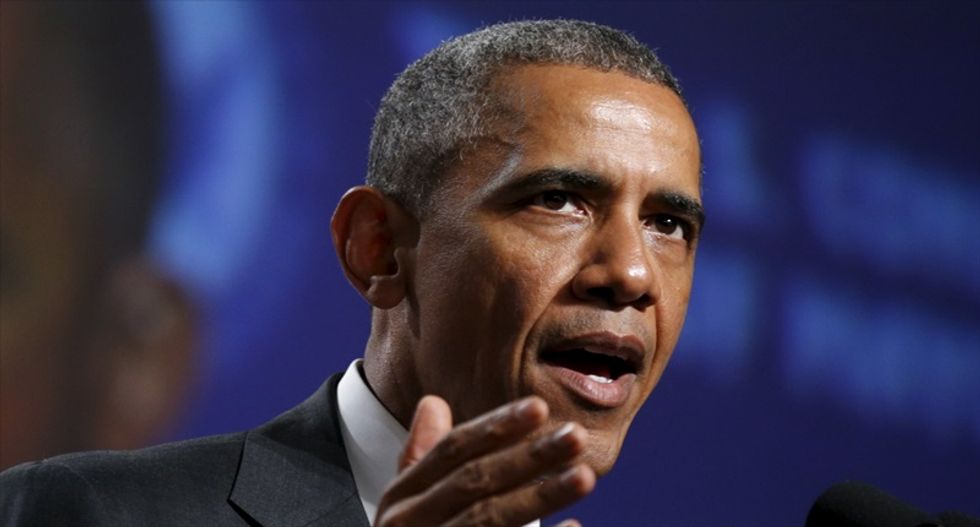 U.S. President Barack Obama speaks about gun violence during an address to the United States Conference of Mayors in San Francisco on June 19, 2015. Photo by Kevin Lamarque for Reuters.

After a six-week congressional battle including two brushes with failure, some fancy legislative footwork and myriad backroom deals to keep the legislation alive, the Senate voted 60 to 38 to grant Obama the power to negotiate trade deals and send them on a fast track through Congress. The bill next goes to Obama for his signature.

Final passage could push the 12-nation Trans-Pacific Partnership (TPP), a central part of Obama's foreign policy pivot to Asia, over the finish line and also boost hopes that an ambitious trade deal with the European Union could soon be completed.

The TPP, potentially a legacy-defining achievement for Obama, would be the biggest free trade agreement in a generation and rank with China's ascension to the world trade stage and the North American Free Trade Agreement liberalizing trade between the United States, Canada and Mexico.

But TPP ministers still have tricky issues to resolve, ranging from monopoly periods for next-generation medicines to the treatment of state-owned enterprises.

Some member countries, including Japan and Canada, want to have fast-track in place before making final offers on the trade deal, which would cover 40 percent of the world economy and raise annual global economic output by nearly $300 billion.

Negotiators say a deal on the TPP, which would open new markets for U.S. exporters such as Caterpillar Inc and Microsoft Corp , could be wrapped up within weeks once countries are sure U.S. lawmakers will not pick the deal apart afterward, which fast-track prevents.

Senators showed slightly less support than in an initial vote a month ago for fast-track, which would let lawmakers set negotiating goals for trade deals but restrict them to yes-or-no votes on final agreements.

Fast-track authority lasts for up to six years and would extend to any trade deals negotiated by Obama's successor, who would take office in January 2017.

The vote came as Congress was trying to finish up the four parts of the trade legislation package and send them to Obama: fast-track negotiating authority, aid for workers who lose their jobs as a result of trade, an Africa trade preferences bill and a customs enforcement measure.

Fast-track was forced back to the Senate floor after a revolt by Democrats in the House of Representatives resulted in it being split from a companion measure extending a program to help workers hurt by trade.

That bill is expected to pass the Senate shortly and will then return to the House. Many Democrats who opposed the aid program last week now plan to support it, including House Democratic leader Nancy Pelosi.

The top Democrat on the House Ways and Means Committee, Sander Levin, said he expects the "vast majority" of Democrats to vote "yes." That would allow both measures to go to Obama for approval this week, before lawmakers go on a week-long break.

The bruising congressional battle has pitted Obama against many in his own party, including Pelosi, and prompted blood-letting among Republicans after party leaders lashed out at conservatives who refused to back the trade agenda.

Opinion polls show a majority of Americans support trade in general, but congressional approval has been a slog because labor unions and activists have campaigned against fast-track, warning of job losses and vowing to retaliate against Democrats who break ranks to support trade.

The front runner for the party's presidential nomination in 2016, Hillary Clinton, said Democratic critics had legitimate concerns but has so far reserved judgment on the TPP.