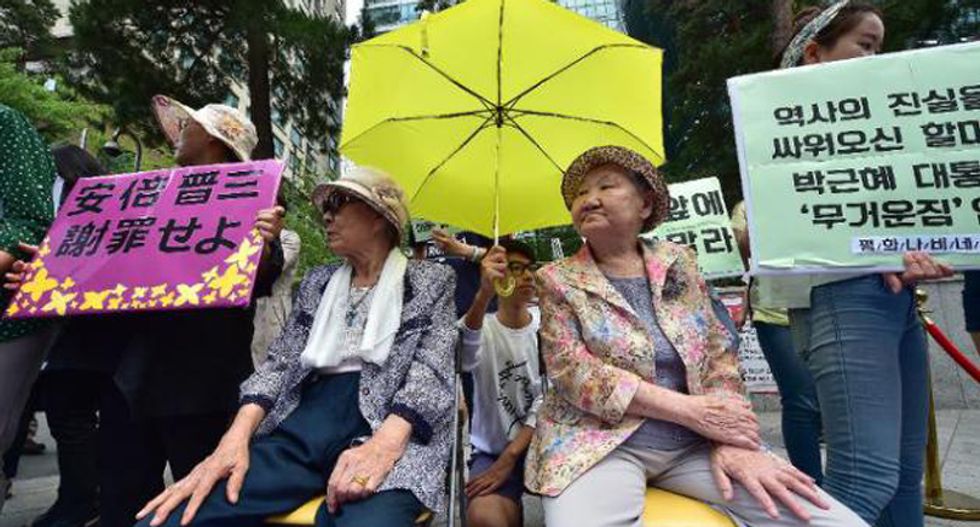 South Korean former "comfort women" Kim Bok-Dong (L) and Gil Won-Ok (R), who were forced to serve as sex slaves for Japanese troops during World War II, sit outside the Japanese embassy in Seoul on June 23, 2015

South Korea's ageing victims of Japan's wartime sex slavery said Tuesday they would file a $20 million lawsuit next month at a US court to seek financial compensation from Tokyo.

The suit from 10 "comfort" women led by Kim Bok-Dong, 89, will be lodged at a California district court on July 1 against Japan, their attorney Kim Hyung-Jin told reporters.

The case, which is now being pursued in the US as previous suits in Japan have failed, also targets Mitsubishi and other companies allegedly involved in war crimes.

Originally a dozen women who were forced to serve Japanese soldiers during World War II had offered to join the legal battle, but two have since died.

"The Japanese government should offer an official and sincere apology for wrongdoings by their ancestors and restore our honour," Kim Bok-Dong told a press conference outside the Japanese embassy in Seoul.

Mainstream historians say up to 200,000 women, mainly from Korea but also from China, Indonesia and other Asian nations, were forced into sexual slavery during the war.

Japan insists the issue was settled in the 1965 normalisation agreement, which saw Tokyo make a total payment of $800 million in grants or loans to its former colony.

South Korea says Tokyo does not fully accept its guilt and has not sufficiently atoned.

The issue, which has remained in the background of diplomatic relations for the last few decades, has blistered to the fore since Japanese Prime Minister Shinzo Abe and South Korean President Park Geun-Hye came to power.

Park and Abe, however, gave a warmer impression in separate speeches on Monday as they marked the 50th anniversary of diplomatic relations between the two countries.

Park has previously maintained there can be no meeting with Abe until Japan makes amends for its "comfort women" system.

But in a recent interview with the Washington Post, she said: "There has been considerable progress on the issue of the comfort women", adding that the two countries were "in the final stage" of negotiations.