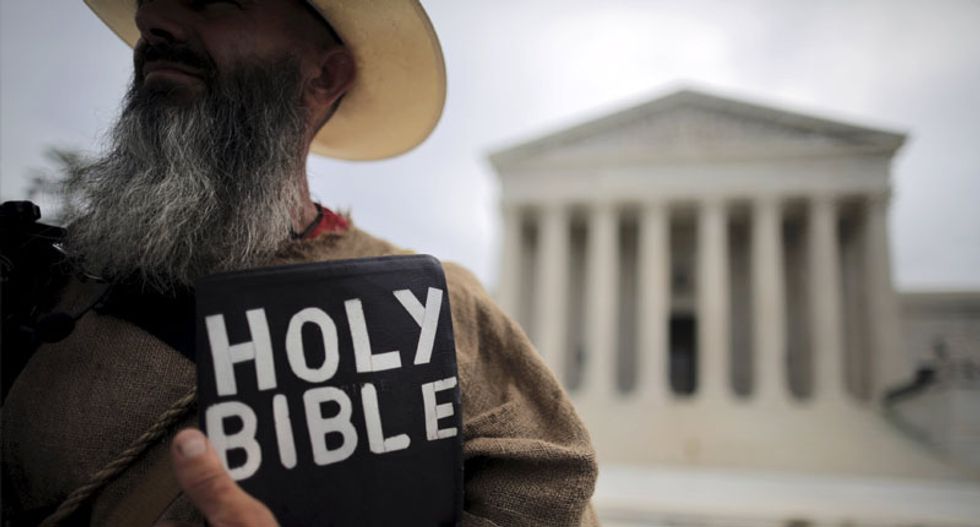 A protester holds a copy of the bible outside of the U.S. Supreme Court building in Washington, in this June 15, 2015 file photo. REUTERS/Carlos Barria/Files

The U.S. Supreme Court on Thursday ruled that an Arizona town violated a local church's free speech rights by preventing it from posting signs notifying the public of its worship services.

The court decided 9-0 in favor of Good News Community Church, which objected to its treatment by town officials in Gilbert, Arizona.

Justice Clarence Thomas wrote on behalf of the court that the town's sign ordinance violated the U.S. Constitution's First Amendment, which protects free speech rights, because it favored certain forms of speech over others.

The church's signs directing people to services were deemed to be event signs, which meant they received "far worse treatment" than other types, including those displaying political and ideological messages, its lawyers said.

Thomas wrote that the town had failed to justify why limits on event signs were needed while similar restrictions were not imposed on, for example, ideological signs.

"If anything, a sharply worded ideological sign seems more likely to distract a driver than a sign directing the public to a nearby church meeting," Thomas said.

The church's leader, Pastor Clyde Reed, challenged the town's 2008 sign ordinance, which had different categories based on content that determine the sign's size, where it can be placed and how long it can be displayed.

“Speech discrimination is wrong regardless of whether the government intended to violate the First Amendment or not, and it doesn’t matter if the government thinks its discrimination was well-intended," said attorney David Cortman of the Christian legal group Alliance Defending Freedom, which represented the church.

Michael Hamblin, the town's attorney, said Gilbert "looks forward to the opportunity to review its own regulations to make necessary changes consistent with the Supreme Court’s decision."

The only supporters for the town were groups representing local government, which said in court papers the ordinance was legal in part because the restriction imposed on the church was the same one that other churches and civic groups advertising public events were bound by.

"Today's decision by the Supreme Court wreaks havoc on the ability of local governments to implement sign code regulations that are responsive to the needs of their communities," said Clarence Anthony, the chief executive of the National League of Cities.

The Supreme Court reversed a 2013 ruling in which the 9th U.S. Circuit Court of Appeals rejected the church's challenge.

A new, less restrictive ordinance was enacted in 2011.