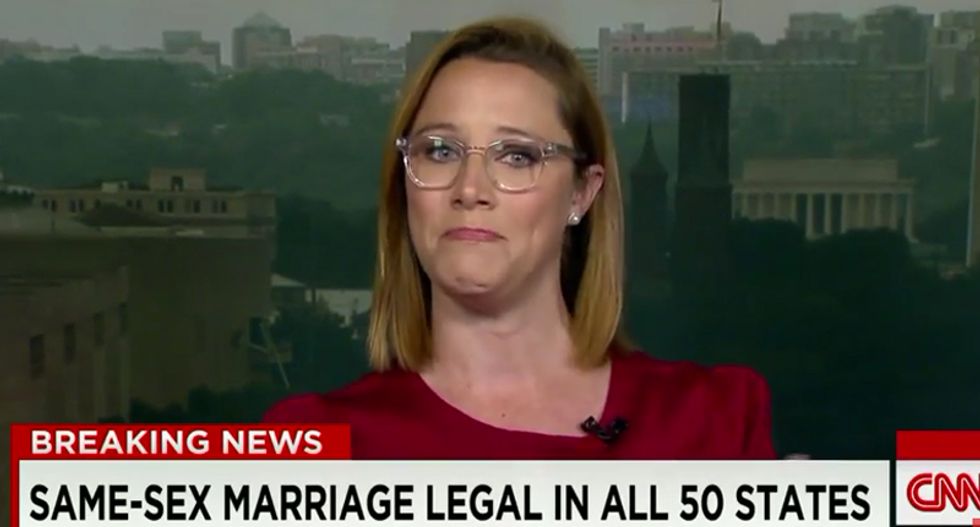 With her voice cracking, and barely able to hold back her tears, conservative CNN political commentator S.E. Cupp implored the Republican Party to accept the Supreme Court's ruling on same sex marriage, saying gay couples are 'Not pariahs, they're patriots."

Despite her conservative credentials, Cupp has long been a supporter of gay unions, saying it makes sense economically, for family stability, and that it is the moral thing to do.

Speaking with CNN host Wolf Blitzer while viewing clips of celebrating gay couples in front of the Supreme Court, Cupp tried to keep her personal feelings in check, saying "It's hard not to watch that and get emotional."

"Those people there are not pariahs, they're patriots," She began."And wherever you stand on the politics of this issue -- and I've long been in support of gay rights -- It's hard not to see these people as just wanting the human dignity that the rest of us have when it comes to death benefits, hospital visitation, or child custody.

"The politics of this is one thing but I would challenge members of my party to look at the faces on the right hand of your screen, and ask yourself if they deserve the same kind of dignity that the rest of us get to enjoy."

Saying people may disagree with how the Supreme Court reached their decision, Cupp became even more emotional, pointing at the screen and saying, "This is America. Those people are Americans, and that is our future. And so for my party, which I deeply deeply love, my party really has to reconcile with the fact that we are going to become relics if we don’t get to where these people are."