Ted Cruz blasts other GOP 2016 candidates: Unlike me, they 'ran for the hills' on defending anti-LGBT laws 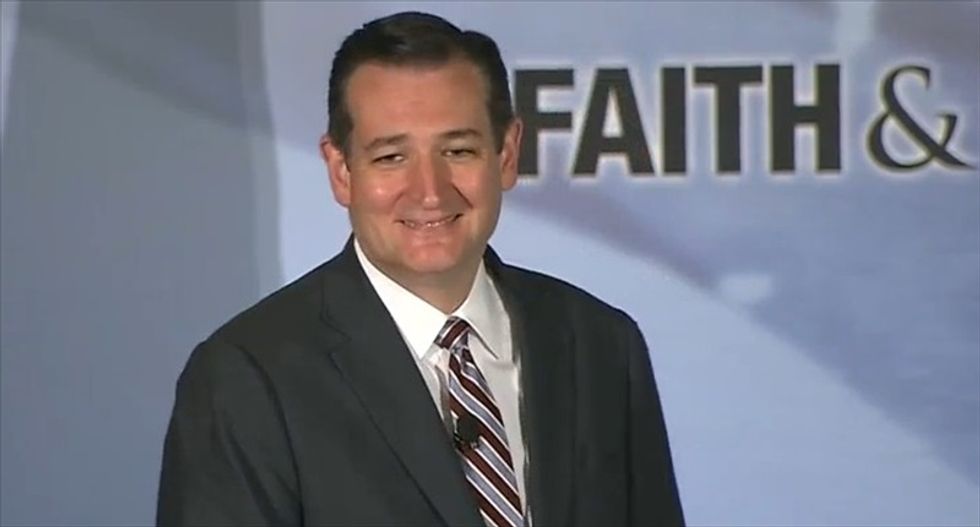 "I'll tell you what was saddest: just how many Republicans ran for the hills," Cruz said during his appearance at a conference hosted by the Faith and Freedom Coalition, later adding, "More than a few Republicans -- sadly, even more than a few Republicans running for president in 2016 -- chose that moment somehow to go rearrange their sock drawer. I'll tell you this, I will never, ever, ever shy from standing up and defending the religious liberty of every American."

Cruz did not identify which Republicans he felt ducked the issue. Former Florida Gov. Jeb Bush initially defended the Indiana law before lawmakers there could have taken "a better approach" on the issue.

However, contrary to Cruz's argument, several other confirmed and prospective GOP candidates publicly expressed support for the Indiana law, Senate Bill 101, after it was signed into law this past March. CBS News reported at the time that the Arkansas law, HB 1228, met with similar backing.

Both laws originally allowed businesses to refuse service based on their religious beliefs, opening the door for legalized discrimination against members of the LGBT communities. On Thursday, Cruz complained that "the perfect storm of the modern Democratic Party and big business" colluded to undermine the laws, which were modeled after the federal Religious Freedom Restoration Act, which was passed in 1993.

"That law was substantively identical to what both Indiana and Arkansas took up," Cruz said. "And yet today's Democratic Party, aided by their friends in the media, and aided even more by big business -- which decided it was good business to throw Christians overboard and abandon religious liberty -- pounded upon leaders there."

Cruz did not mention a Fox News report at the time explaining that the Indiana version of the law, in particular, had a broader scope.

"In specific terms, Indiana's law deals with a person who can claim religious persecution but that includes corporations, for profit entities and it could also be used as a defense in a civil suit that does not involve the government," anchor Bret Baier said. "That is broader than the other laws."

Facing not only national criticism but boycott threats, lawmakers in both states quickly passed amended versions of the bill ensuring that business owners could not discriminate against LGBT customers.

The groundswell of criticism against such measures, Cruz said, made him believe that the next election will center around religious freedom.

"The modern Democratic Party has decided their commitment to mandatory gay marriage in all 50 states trumps any willingness to defend the First Amendment," he said.

Watch Cruz's speech in its entirety, as posted online on Thursday, below.