Tennessee Republican: What separates us from ISIS if we rename park honoring KKK founder? 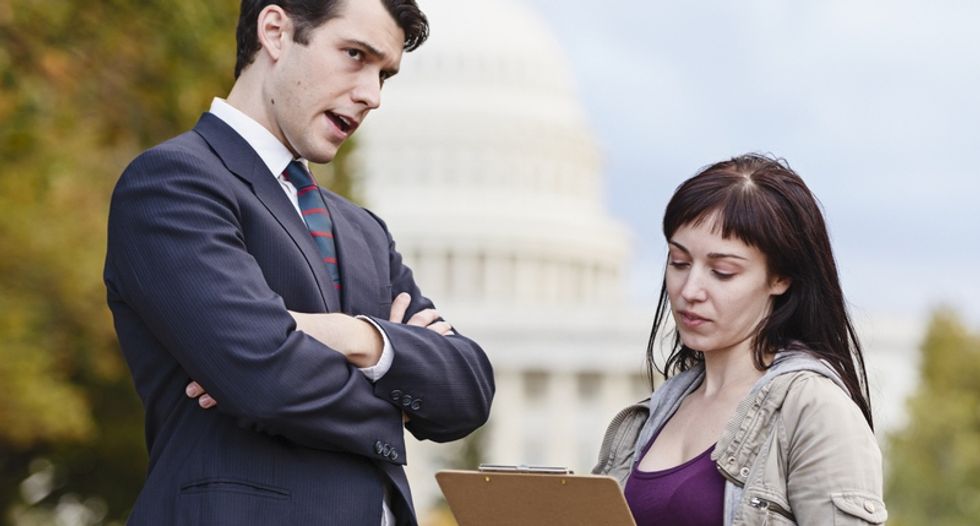 A politician makes confusing statements to a reporter (Shutterstock)

Republicans in Tennessee oppose renaming a state park after a lieutenant general in the Confederate army because they fear the rise of an American "ISIS," the Jackson Sun reports.

Democrats in Tennessee are calling to rename the Nathan Bedford Forrest State Park. In addition to being a Confederate soldier, Forrest was the first grand wizard of the Ku Klux Klan.

"Why would we celebrate anything that produced evil?" State Representative Johnny Shaw (D-Bolivar) tells the Jackson Sun. "It is a celebration of evil. The name of the park, the statue, and the whole nine yards."

But some Shaw's colleagues disagree.

State Senator John Stevens (R-Huntingdon) tells the Jackson Sun that the push to take Forrest's name off a public park is a politically-motivated ploy following an act of racist terror in a Charleston church last week that left nine dead.

"I'm certainly not going to defend Gen. Forrest," Stevens clarifies to the paper. "I just think it's a slippery slope when you start changing names and taking down statues."

"What separates us from ISIS?" Stevens asks. "Because that's what they do, they go around and tear down history in those nations that they've conquered. If that's what America is about now, then it concerns me."

State Representative Tim Wirgau (R-Buchanan) for his part, doesn't understand why his democratic colleagues are calling so fervently to remove Confederate symbols from public property.

"I think that there's a lot of emotions running high right now, and it's tragic," Wirgau tells the Jackson Sun. "I'm not sure enough of the history of the park or whatever to see where this ties into what's happening, quite frankly."

Earlier this week, Tennessee Democrats in the statehouse and the U.S. Congress called for the removal of Forrest's bust from inside the capitol building. In contrast to Stevens and Wirgau, the state's Republican party official supports the change, the Tennessean reports.

"Symbols of hate should not be promoted by government. South Carolina should remove the Confederate battle flag from its Capitol, and Tennessee should remove the bust of Forrest inside our Capitol,"  U.S. Representative Jim Cooper (D-TM) tells The Tennessean.