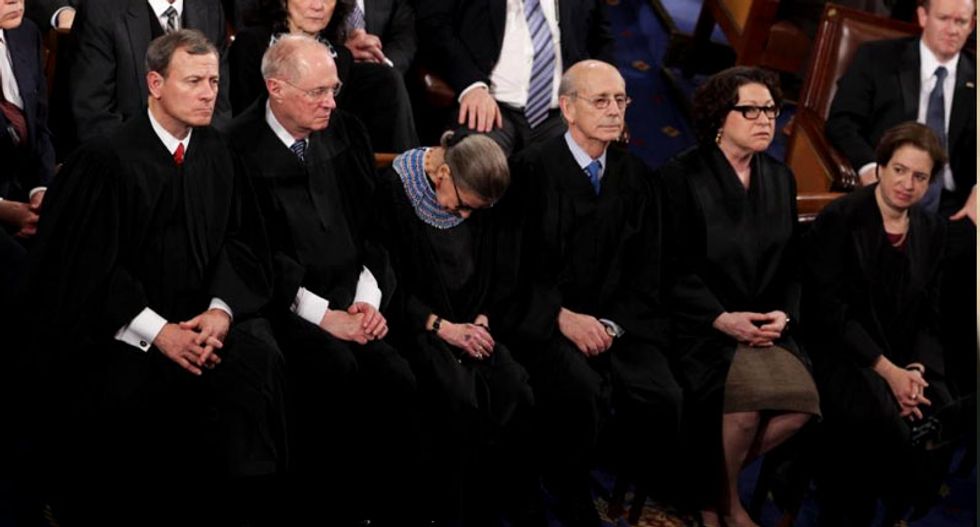 Tensions are building inside and outside the white marble facade of the U.S. Supreme Court building as the nine justices prepare to issue major rulings on gay marriage and President Barack Obama's healthcare law by the end of the month.

Of the 11 cases left to decide, the biggest are a challenge by gay couples to state laws banning same-sex marriage and a conservative challenge to subsidies provided under the Obamacare law to help low- and middle-income people buy health insurance that could lead to millions of people losing medical coverage.

Many legal experts predict the court will legalize gay marriage nationwide by finding that the U.S. Constitution's guarantees of equal treatment under the law and due process prohibit states from banning same-sex nuptials.

The four liberal justices are expected to support same-sex marriage, and conservative Justice Anthony Kennedy, the expected swing vote, has a history of backing gay rights.

In three key decisions since 1996, Kennedy has broadened the court's view of equality for gays. The most recent was a 2013 case in which the court struck down a federal law denying benefits to married same-sex couples.

During oral arguments in the gay marriage case on April 28, Kennedy posed tough questions to lawyers from both sides but stressed the nobility and dignity of same-sex couples.

The healthcare decision is tougher to call. Chief Justice John Roberts, the swing vote when the court upheld Obamacare in 2012, said little during the March 4 oral argument to indicate how he will vote.

The court will issue some rulings on Monday, with more likely later in the week.

For the justices, the pressure is on to have the rulings ready. That can be difficult as the cases in which they are closely divided are generally the ones left until the end.

Outside the court, those with a stake in the outcome of the rulings are left anxiously waiting.

James Obergefell, one of the plaintiffs in the gay marriage case, said he will be at the court for all the remaining decision days.

Obergefell sued Ohio, challenging its ban on same-sex marriages, after the state refused to acknowledge his marriage to John Arthur on Arthur's death certificate. They were married in Maryland, a state that allows gay marriages, just months before Arthur died in 2013.

The Supreme Court does not announce in advance which rulings will be issued on any given day.

"It's nerve-racking, it's exciting, but it's also scary," Obergefell said while waiting in line to enter the courtroom on Thursday.

On the other side of the issue, the Alliance Defending Freedom, a conservative Christian group that opposes gay marriage, will have at least two attorneys in the courtroom, spokeswoman Kerri Kupec said.

As for the closed-door deliberations at the court, Justice Ruth Bader Ginsburg hinted during a June 12 speech at the turmoil to come. "Sharp divisions, one can confidently predict, will rise in the term's final weeks," Ginsburg said.

Prior to June 15, the court was split 5-4 in only seven of the 46 cases decided at that point. But last week alone, four of the nine rulings were 5-4 decisions. In the rulings, several justices wrote separate opinions in which they aimed pointed comments at their colleagues.