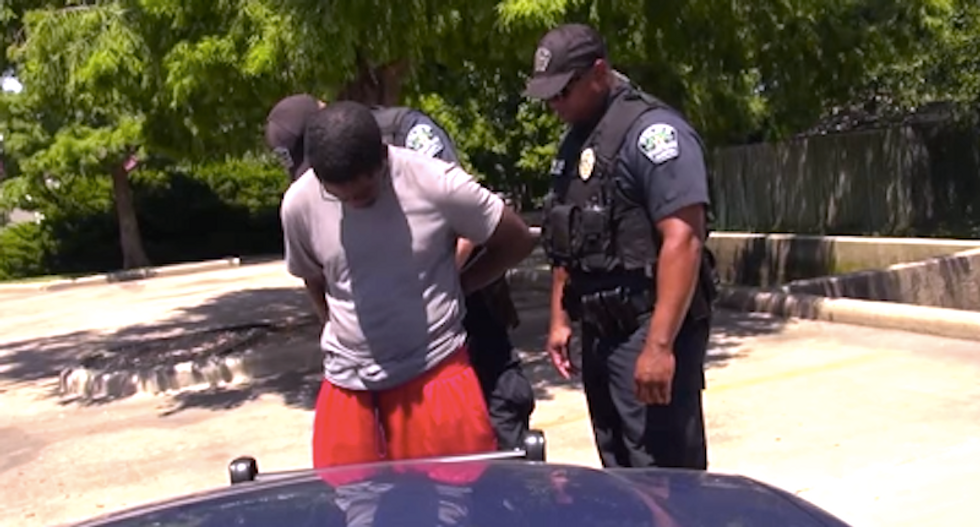 Police in Texas argued with a camera-carrying man for nearly a half hour over whether he must show identification before eventually letting him go.

The entire incident, which happened outside a Sonic fast food restaurant in Austin, is captured on video posted online last week by a YouTube user called The Battousai, reported the Houston Chronicle.

The photographer had been filming an Austin police facility from the eatery’s parking lot as part of a “First Amendment test” when three officers came over and asked to see his identification.

The black man, who has filmed several similar encounters with police, refused and asked the officers if he was doing anything illegal.

One officer initially said he was, but then conceded he was apparently not after the man asked for specific details.

The photographer again says he will not show identification, and the officers become impatient and they would see his ID “one way or another.”

"I know you're used to this going one way based on the YouTube education you've gotten, but that's not how we do it," the officer says. "OK, we're going to do this according to our policy and according to law."

The activist points out that the parking lot is a public area, and the officer tells the others to take him into custody.

"If he doesn't want to do it, go ahead and put him in handcuffs and we can do it until we find him in the system,” the officer says. “That's the way it goes -- suspicious people, suspicious places, suspicious circumstances. The code of criminal procedure gives us that authority."

Under Texas law, officers may demand identification if they have a reasonable suspicion the person is committing or has committed a crime.

The officer seen in the video said the photographer’s actions suggested he could have been plotting an attack or suffered from a mental illness.

However, legal observers are doubtful – although they concede reasonable suspicion is a very low standard.

"If they're going to detain you where they are not free to leave they have to have reasonable suspicious you're involved in a crime," said defense attorney Kevin Bennet. "I would ask the officer what section of the Texas penal code or what ordinance he had suspicion that I was violating."

Austin police said officers may detain suspects if their demeanor is suspicious, they’re carrying suspicious objects, they’re out at an odd time, or their presence in an area is suspicious.

Officers cuff the activist and place him inside a squad car, where he calmly and quietly sits for more than 15 minutes, and police allow him to continue filming and even position the camera for him after he is detained.

The officers ultimately let the activist go without charging him, but they said they would file an unidentified subject report.

The Battousai claims officer violated his First, Fourth, and Eighth Amendment rights during the incident.

Watch the entire incident posted online by The Battousai: