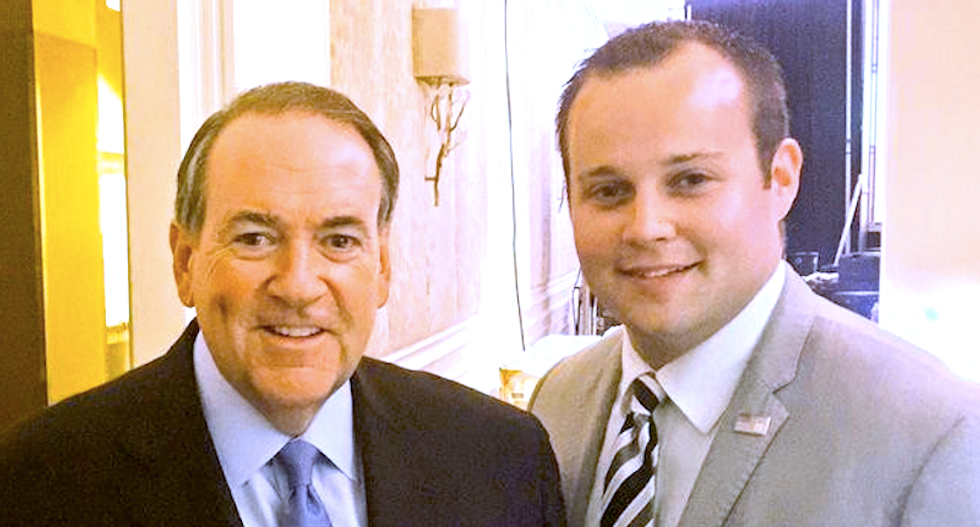 Former Arkansas Governor and 2016 presidential hopeful Mike Huckabee seemed to be the Duggars' best friend, with Huckabee throwing his support behind the embattled couple after allegations their eldest son, Josh, molested underage girls - most of whom were his own sisters - came to light recently.

But sometime Monday night, Jim Bob and Michelle Duggar's top billing as Huckabee supporters disappeared from his campaign website, Talking Points Memo reports. An archived version of the website shows the Duggars topped his endorsement list under the right column called "I like Mike."

In the current version of his website, the Duggars are missing.

On May 22, Huckabee wrote in a Facebook post, "Janet and I want to affirm our support for the Duggar family. Josh’s actions when he was an underage teen are as he described them himself, 'inexcusable,' but that doesn’t mean 'unforgivable.' "

Tuesday night, Huckabee's fervent support seemed to be cooling. When asked at a fundraising event whether the Duggars would be joining him on the campaign trail, he answered noncommittally, "“I don’t know, it will be up to them. Ask them I don’t know,” according to Buzzfeed.

The Duggars gave a disastrous interview to Fox's Megyn Kelly on Wednesday night, in which they claimed to be the real victims. When Kelley confronted Michelle about robocalls against a Fayetteville, Arkansas city ordinance that would protect citizens from discrimination, in which Duggar calls transgender people a "threat" to the safety of women and children, Duggar digs herself deeper.

“I think that protecting young girls and not allowing young men and men in general to go into a girls’ locker room is just common sense,” she responded.

Huckabee also found himself in hot water after creepily stating he wished he could have identified as a woman in high school so he could have showered with girls in P.E.